How to remove mucus in the nasopharynx

To remove the mucus from the nasopharynx, it must be rinsed. This can be done both at home and in the treatment room ENT. But to go to the hospital in the period of the disease - not the best option, so it's easier to do washing at home. Well, that this procedure is safe and cannot harm even the youngest children. 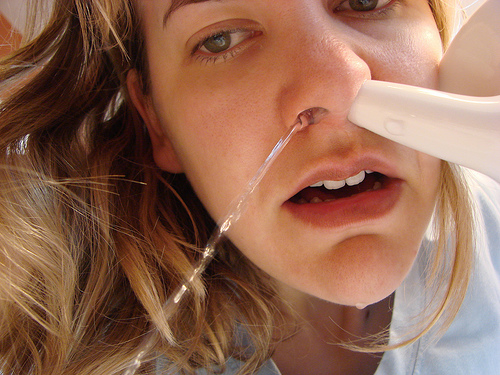 Related articles:
You will need
Instruction
1
Before washing of the nasopharynx, be sure to sterilize the enema or syringe that you will use. After the syringe and let the sauce to boil for 5 minutes, carefully remove it from the water and place on a clean towel. If you have an inflammatory process in the cavity of the nasopharynx, use a saline solution for lavage. When the swelling and accumulation of mucus caused by allergens, decoction of nettle, chamomile or celandine. Dosage medicinal plants for irrigation of the nose should be approximately the same as for ingestion, but you can dilute the broth with clean water in a 50/50 ratio.
2
Wash nasal passages you either over the sink or over a basin. Prepare everything you need for washing: towel, water and a syringe. Now, move on to the procedure. If you have a very very stuffy nose, you can use before washing vasoconstrictor drops. But this is not necessary because the water will wash away all the mucus, however, it will take more time and solution.
3
Type in an enema or syringe irrigation solution. Tilt your head over the sink and start to beat jet from the syringe into the nostril. First flush one nostril, then the other. Do not forget that your mouth should be open, because the water should flow through it, otherwise you will wash only the nasal passages. When the water begins to flow normally in the nose and throat, increase the pressure of the jet.
4
In order to achieve a speedy recovery procedure is carried out several times a day. Can use in the first washing solution of sea salt (1 tbsp per liter of water), and the second - any decoction of medicinal plants, and so alternate. If you have inflammation in the nose and throat, then bury a few drops of aloe Vera juice after washing the nose, when the passages are freed of mucus. Instead aloe will fit any spray plant-based, which can be purchased at the pharmacy.
5
If you do not want to restore the solutions, buy the special sea water. It is sold in handy bottles with which to wash the nose. The producer in this case would not be necessary. If you're just afraid to do this procedure at home, go to the hospital, the doctor will wash you with his nose literally in a few minutes.
Is the advice useful?
See also
Подписывайтесь на наш канал