How to plant a vegetable garden

Break a vegetable garden means a plot of land suitable for growing vegetables, fruits and herbs. A vegetable garden is probably the most ancient source of food for people. The garden can be broken anywhere, but to bear fruit it will be only where the soil is fertile, and the climate is suitable for plant growth. 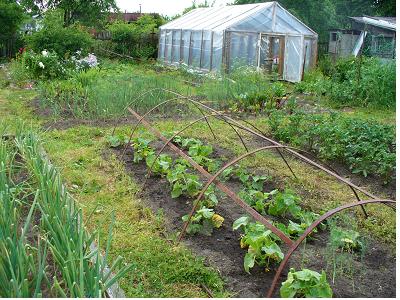 Related articles:
You will need
Instruction
1
The first step is to choose a plot of land, which later will become your vegetable garden. It should not be too large or too small: a tiny garden to grow whatever he wants, and a large garden will take a lot of time and effort. The size of the garden depends on how much and what you intend it to grow. The boundaries of the area it should be noted, by driving pegs where the angles are assumed to be the future of the garden. So it will be easier to make a plan. Between the pegs pull the ribbon or twine.
2
Best to start with making a garden plan. In the drawing, it should be noted, whether in the garden to be a house, and if so, where. You should also think, where will the track and where it's most convenient to position the bore or barrel of water. Trees and shrubs - Apple, cherry, cherry tree, usually planted around the edges of the garden. Closer to the middle of it are beds with vegetables. Traditionally, a large portion of the garden allocated for planting potatoes. In the center, in a conspicuous place nice to have a flower garden or Alpine slide".
3
If the garden is broken on the site for the first time, such a plot is called a virgin. The soil it is considered good and gives a rich harvest, but for this it is necessary to properly prepare. In the first place the ground should be carefully dug down. Do it best in early spring when the ground has just thawed. The top layer of soil is called sod. It rotted fallen leaves, woven grass roots, and so on. During the digging of the site should try to ensure that the turf was at the depth of 10-15 cm, and the surface came the fertile black soil.
4
After digging the ground must be well plowed. The softer the soil is, the easier it will be to sprout the useful plants. Loosen the soil with a harrow and rake.
5
Then it is time to outline the boundaries of future garden beds. You need to strike a balance by considering their magnitude and location. The beds are transferred from the drawing to the terrain, their corners marked with stakes. After this, the beds should be established. Generally, it is accepted that the beds were 10-15 cm above the surface of the garden.
6
When the beds are ready, you can think over what is put on them. Here are some crops that grown in vegetable gardens: potatoes
carrots
bow
- cucumbers
- tomatoes
- dill
- parsley
- peas
- beets
salad
- zucchini
pumpkin
- apples
- pears
- strawberry
- raspberry
smorodinovoe it can be planted in the garden.
7
It should be remembered that there are plants perennial, biennial and annual. Perennial, such as apples and currants, can be planted once and they will bear fruit for many years. The two-year plants include, for example, the potatoes - it gives the fruits in the second year after planting the seeds, so it is not customary to plant seeds in the ground already buried tubers. Annual plants are carrots, parsley, dill, radishes. Planted them, harvested the fruit, and the next year planted again.
Note
Choosing the site for a vegetable garden, you should think about the fact that it was located on a flat surface. Not very good if the garden is on a hill or in a valley: the water will drain, failing to nourish the earth, or rather to stagnate.
Useful advice
Many people have experience in setting up kitchen gardens. Such people can be very useful if you need some specific instruction or advice.
Is the advice useful?
See also
Присоединяйтесь к нам
New advices