How to pickle watermelon in the winter

Some of you may not know that sugar and juicy watermelons can be salted for the winter, thereby obtaining a great snack. Take into consideration recipes harvesting watermelon and surprise your guests with unusual dish. 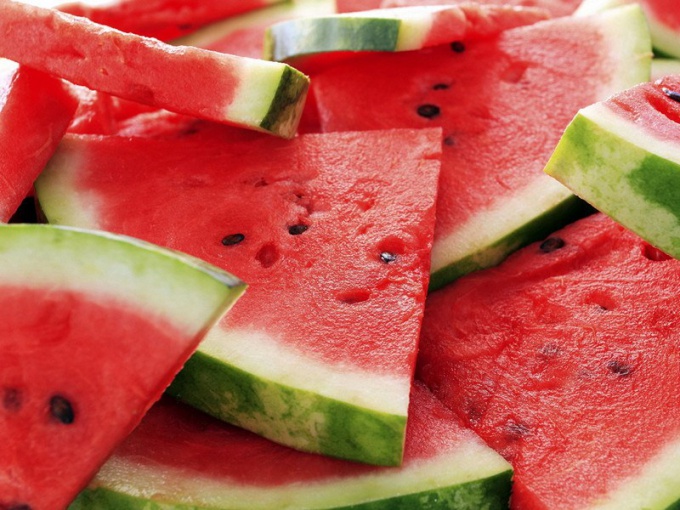 This method of salting you will need ripe watermelons, which should be washed carefully and cut the top part of the red pulp. Slice the watermelon into rounds with a thickness of about two centimeters. Each circle is cut into sectors, so that they easily pass into the neck of the jar. Gently, layer by layer, lay the slices of watermelon in a jar. Fill them with boiling water, cover and steep for ten minutes.

Then drain back into the pan and boil again, adding 30 grams of salt and 15 ml of vinegar 9% in one liter of water (if you use brown watermelons pickles, then you can add to the brine 20 grams of sugar per liter of water). Pour the prepared watermelon pickle to the edge of the jars and hermetically ocuparte. Cover with inverted cans watermelons with a warm blanket and a day later put them in a cool and dark place for storage.

Salting watermelons in a wooden barrel

For pickles this way, you need to use quite ripe watermelons late varieties, uniform in size, not cracked and not overripe. Average weight of watermelon for pickling in barrels should not exceed two pounds. Thoroughly wash the watermelon and put each of them in ten or fifteen places using wooden needles, because of this they are better saturated brine, and will accelerate the fermentation process.

In a pre-prepared, thoroughly cleaned and dried the barrel put a small watermelon and pour the hot brine. To prepare ten liters of brine is necessary to take 800 grams of salt. Do not have to shift the watermelons spices, appetizer and so it will be excellent. Filled with pickle barrels drive in wooden stoppers with fabric strips. Keep the watermelons in the cellar, basement or glacier. After two or three weeks, pickled watermelon will be ready to eat.