How to tell fortunes by cards

What would that be than the heart to calm down? To get answers to these questions, people are often drawn to the witch, witch doctors and sorcerers. Of course, this is one of the best options to go for help. But you can try and to learn the art of divination. At least to overcome the science of divination by the cards is not so difficult as it seems at first glance. 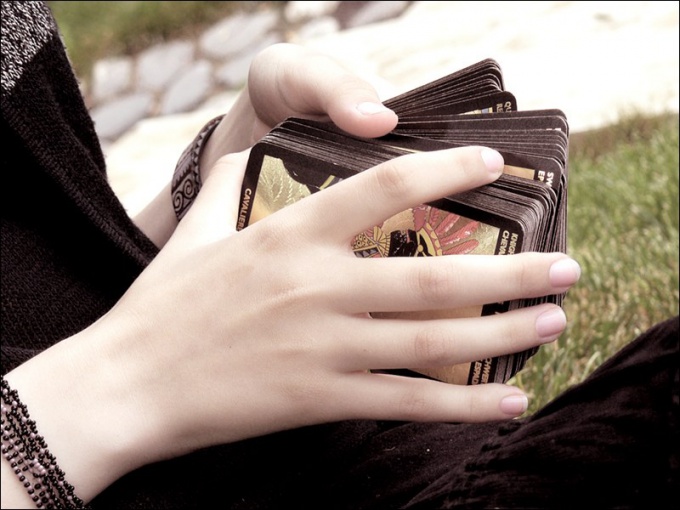 Related articles:
You will need
Instruction
1
For divination you will need a deck of playing cards. You can buy it at almost any store. Then you will need to master some basic methods of divination.
2
With the help of maps you can get the answer to your question, find out what awaits you and yours in the near future. But the truth is, during the divination will tell you only those cards that are only used for divination. So you should not give to use your deck to unauthorized persons. Card can charged someone else's energy and start to vandalize and cheat his master.
3
One of the easiest method of divination – obtaining of the answer to your question. To do this, take the deck and thoroughly shuffle the cards. At the same time, clearly formulate your question. And then pull from the deck one card and see its value. Usually six mark the way, seven – conversation eight – nine – love, tens suffering. Pulled from the deck of the knave tells of an impending trouble. Lady – a woman who can play a positive role in resolving the issue (if the lady in the red suit) or negative (if the suit of the card is black). The king in this guessing is a man, serviceman, man. The ACE will report on any news, pleasant or not - depends on the suit of the card.
4
If you're wondering what to do in any given situation, formulate the question in a form to allow him to answer "Yes" or "no". Shuffle the deck and, without hesitation, pull the first available card. If the card is a red suit, the answer to the question is positive. When you pulled out the black suit cards will give a negative answer.
5
Want to learn how to you is your young man? Arrange the cards into as many piles as the letters in his full name. Then take the last pile and put the cards on the previous one, starting with the first "letter". And so on until you are left with two piles. Now take both cards from each pile and flip them. Pair say about the attitude of your young person. Fall two sixes – you will find a way, seven – he wants to talk, eight – wants to meet. Nines say about his love for you, tens - of suffering. Fallen Jack will report on the trouble, ladies – he has another. Dropped two of the king? So he thinks about you. As aces say that he wants to be with you.
Useful advice
Never set a card twice the same question: they don't like it.
Is the advice useful?
See also
Подписывайтесь на наш канал