How to determine gear ratio

One of the devices most commonly used today in a variety of mechanisms, is the gearbox. It is a development of the idea of the lever and serves to transmit torque between the rotating pulleys. The main parameter characterizing a specific gear, is the gear number. It can be defined by performing calculations based on information about the type and parameters of the speed reducer. 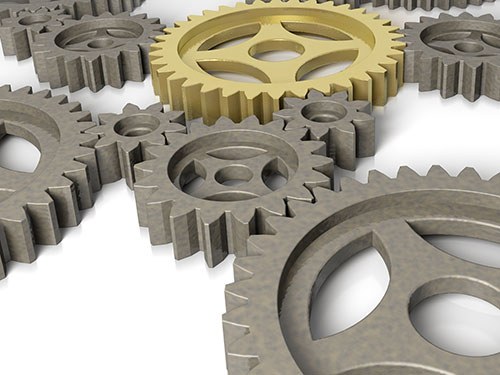 Related articles:
You will need
Instruction
1
Determine gear ratio, consisting of a single gear. In devices of this type the torque is transmitted from the drive shaft driven by engagement of teeth of the gear installed on them. Gear can be both cylindrical and conical - in this case, it doesn't matter. First determine the number of teeth of the gear drive shaft by a simple calculation. Then perform the same operation for the driven gear shaft. Divide the second value to the first. This will be the desired gear reduction ratio.
2
When calculating gear ratios, made on the basis of chain transmission, operate similarly to the first step. Count the number of teeth of the driving and driven sprockets, and then divide the second value to the first.
3
To estimate the gear ratios on a belt it is necessary to know the radii (or diameters) of its driving and driven pulleys. Please note that this must be the radii of the circles, through which passes the inner part of the belt during its contact with the pulleys. Therefore, if the pulley is made in the form of a roller with a groove to hold a belt, it is necessary to measure the radius or the diameter of its inner part. In this case, to calculate gear ratio by dividing the radius of the driven pulley on the radius host.
4
In gearboxes is based on worm gear leading pulley is always the one on which is located the worm, and the slave - where is the worm wheel. In one revolution of the worm wheel (gear) turns on the number of teeth equal to the number of threads of worm (in the simplest case is a unit). Therefore, the gear ratio of such a gear is calculated by simple division of the number of teeth of the worm wheel by the number of visits worm.
5
The gear ratio of the reducer is composed of gear, determine by successively multiplying the ratios of its individual steps.
Is the advice useful?
See also
Подписывайтесь на наш канал