How to draw pencil hamster

Hamster is a funny little animal, which I love to play, adults and children. The animal is typical for rodent paws, short tail, soft, fine ears, and chubby cheeks. To have fun, draw a funny hamster along with the children. 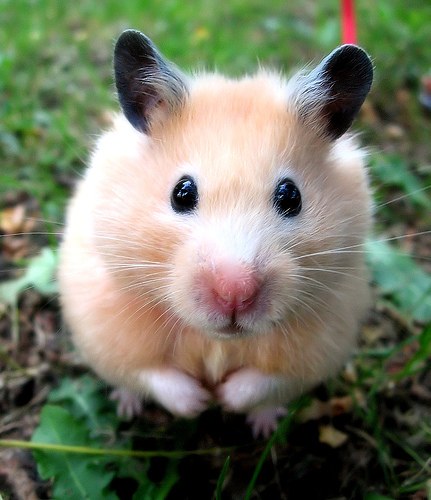 Related articles:
You will need
Instruction
1
Take a simple pencil and a sheet of paper. Decide on the basic form of the figure and thin lines mark the basic outlines of a hamster. The size of the animal is usually small, about 5-10 cm in length. Find the middle of the sheet, a little above it, draw a round head.
2
Then mentally divide the upper circle in half and determine where to put the nose, eyes and mouth, draw small strokes. Under the first circle draw a second circle, the upper part of which must go to the head - this is the body of a hamster. The trunk must be much larger than the head of the animal.
3
After you have drawn the basic shape of a hamster, start to draw the details. On the second circle symmetrically draw the limbs of the animal. In the middle of the torso draw the front legs and the back draw at the bottom of the body. Try to draw each finger.
4
Next draw two small circles for eyes, then draw two triangular in shape - these will be ears of the animal. Draw the nose, the area around the eyes, add whiskers on the muzzle of a hamster. Cheeks of the animal, try to portray the appearance of saggy pouches.
5
Light, short and a bit rounded strokes to draw the fur. Remember that it's animal very dense. Eraser to gently erase all the extra lines. More clearly draw the nose, eyes, mouth, ears, feet. Thin short lines mark the whiskers and little tail.
6
Once you have made the sketch, make a simple shading with a pencil.
Is the advice useful?
Присоединяйтесь к нам
New advices