Why the Earth rotates

"And still it moves!" - the famous words attributed to Galileo. Our planet doesn't revolve around the sun and around its axis. Why this is happening, put forward many hypotheses, but the General opinion of scholars until he came. 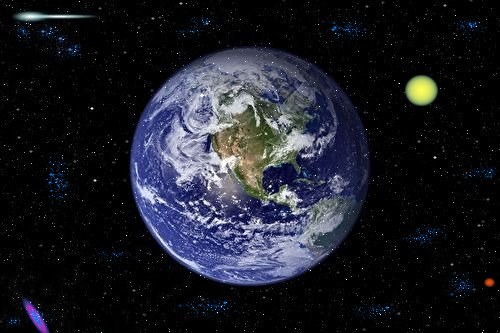 Related articles:
For the first time the Earth's rotation around its axis wrote Copernicus in 1543 treatise "On the circulation of the celestial spheres". But the exact answer to the question of why it was not found until now. The most famous of hypotheses associated with the theory of the origin of the Earth. Through it, our planet was formed from cosmic dust clouds that are "huddled in a heap and formed the nucleus or the center of the Earth. Next to him were drawn of the other cosmic bodies in a collision with that planet started to spin. Continue rotating by inertia.This theory refers to the emergence of not only the Earth but also other planets of the Solar system. This hypothesis cannot explain why six of the planets rotate in one direction, and Venus is the opposite.In addition, until the beginning of XX century it was believed that the Earth rotates at a constant speed and the period of its revolution even took over a unit of time. But the result of long observations revealed that the Earth's rotation is uneven. Happen annual, semiannual, monthly and fortnightly fluctuations of rotational speed during the time which the Earth speeds up and slows down its rotation in thousandths of a second, from-for what duration of day it increases, then decreases. This discovery refutes the theory of the Earth's rotation by inertia and the hypothesis of S. I. Braginsky, in which our planet seems to be a kind of Dynamo-machine.Bind causes the Earth's rotation with external impact on the planet from the Sun. It heats the liquid and gaseous substances on the planet. It happens unevenly and contributes to "air" and "sea" currents. And they, in turn, interact with the crust, move it and affect the acceleration and deceleration of rotation. Scientists have found that during the summer period (June to September) the Earth rotates faster than in other seasons. And after the most powerful solar flare February 25, 1956 our planet suddenly changed the speed of the rotation.
Is the advice useful?
See also
Присоединяйтесь к нам
New advices