Gixy (Hyksos) is the name of the conquerors of Egypt, probably of Semitic origin, invading from Asia to the Nile Delta at the end of the reign of the XIII dynasty, circa 1075 BC the story of the invasion Gixaw given in Manetho in the second book. 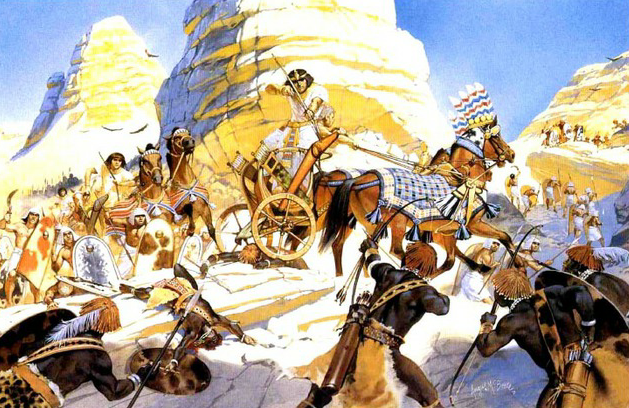 The name "gicsi" Manifol interpreted as "shepherd kings"; however, it is more correct to understand it as a Greek distortion of the Egyptian term "Lord of countries". The story of Manetho about the invasion Gixaw is in the nature of folk narrative and giving in General, true legend, true historical monument can not be considered.

Monuments, ascending directly to the actual Hexam, extremely little; they were found in Egypt, in the South near the Tapestry, in southern Palestine, in Mesopotamia and in Crete. This indicates that the influence (if not rule) Gixaw extended to an extremely vast territory. Invasion Gixaw it went to the North. In the North-Eastern border of Egypt, near the caravan route to Syria, they founded the fortified town, mountains. Avaris and, according to Manetho, imposed a tribute to all of Egypt, "protesting what was done".

Their sovereignty continued, with the latest scientific data, not 500 years (Manetho), but only about 150 years. The attempt to overthrow the yoke Gixaw was taken from the South by the rulers of Thebes, three of Egypt sekenenra, who ruled successively one after another.

Finally, replace Gixaw from their stronghold of Avaris was only the first king of the XVIII dynasty following the Ahmese I continued the pursuit of the enemy and expelled outside the country, in the South. Palestine, Syria and Phoenicia.

Gixy 6 years withstood the onslaught in southern Palestine; this leads us to assume that they owned and Syria, and Palestine.