What are the analogues of the drug "Polyoxidonium"

"Polyoxidonium" is an immunostimulant drug, increases the body's resistance to infectious diseases. In addition, this drug has a broad spectrum of activity and strong antioxidant and detoxifying effect. As a rule, "Polyoxidonium" is well tolerated by humans, does not cause allergic reactions and mutations. However before purchasing you should carefully study the instructions for use. 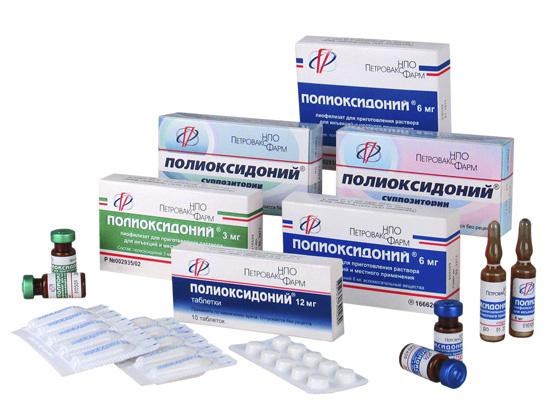 Analogues of the drug "Polyoxidonium"

It should be noted that the immunomodulator "Polyoxidonium" has analogues in the form of drugs with similar effects, and therapeutic properties. Note that as the active component these drugs contain other chemical compounds. You need to remember that to make a decision on the replacement of the medication "Polyoxidonium" can only be a doctor. Analogues "Polyoxidonium" are drugs having an immunostimulating effect.

"Immunal" - its use is recommended for prevention of colds and flu; with the weakening of the immune system due to various factors – effects of chemotherapy, ionizing radiation, development of chronic inflammatory diseases such as prostatitis, rheumatism, gynecological diseases.

"Erbisol" - has anti-inflammatory, immunomodulatory, antioxidant and adaptogenic properties. In addition, the drug helps to restore carbohydrate and lipid metabolism, destruction of infected cells. Thanks to the active components of the tool, the normalization of the balance of humoral and cellular immunity in patients with cancer, allergic and autoimmune reactions.

"Kupret" - herbal medicine, providing antiviral, anti-inflammatory, anti-edematous, immunomodulatory effect. The use of this drug leads to a decrease in the acute period of infectious diseases. Suitable for therapeutic treatment of tonsillitis, pharyngitis, laryngitis. In addition, can be used for prevention of recurrences of directly chronic respiratory diseases.

"Ribomunyl" - contributes to the activation of cellular and humoral immunity, has immunostimulatory effects. Assigned as a therapeutic and preventive drug in the presence of prolonged infections of ENT organs and respiratory tract. Allowed for use by patients six months of life.

"Galavit" is used in the complex therapy for correction of the immune system in adults with serious diseases of the digestive and gastrointestinal tract, viral liver disease, nonspecific colitis, gastroenteritis, gastric ulcer and duodenal ulcer. In addition, the drug has a pronounced anti-inflammatory effect. The use of "Galavit" leads to a decrease in intoxication, which is directly linked to the inflammatory process.

"Cycloferon" is a antiviral and immune-stimulating drug with a wide spectrum of activity. It provides not only anti-inflammatory but also antitumor, and antiproliferative effect. Assigned with the development of viral infectious diseases such as hepatitis, influenza, encephalitis, herpes, HIV. Helps to suppress the autoimmune reactions of the organism, thereby reducing the severity of pain and inflammation in the connective tissue.


Contraindications to the use of the medication "Polyoxidonium"

It is important to note that all formulations of this drug in the form of injections, suppositories and pills it is absolutely contraindicated in pregnancy and feeding baby breast. This is because there are no objective data on the effects of medication on the condition of the woman and the fetus. In addition, do not use "Polyoxidonium" people related to it hypersensitivity and idiosyncrasy. With care prescribe the medicine to patients suffering from acute renal failure. In addition, "Polyoxidonium" is not allowed for children less than six months.
Is the advice useful?
Присоединяйтесь к нам
New advices