Barbs: reproduction in the home

Barbs is a great choice for beginner aquarists. Because fish are unpretentious and quite peaceful, their reproduction in the home will not be easy. The most common species are the Sumatran tiger barbs with a magnificent Golden-yellowish color. 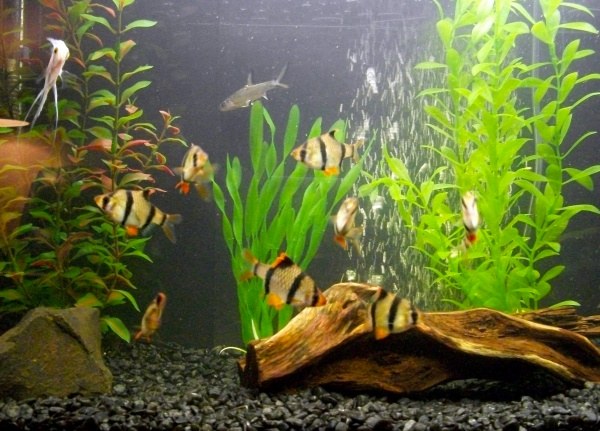 Barbs. Breeding in the home aquarium

For reproduction in the home required a large aquarium of at least 20 liters. Note that barbs do not like bright light, so the aquarium should be placed dense thickets of plants with small leaves and moss. We should not forget about the spawning panicles. Barbs – fish, throwing their offspring to fend for themselves. Often they just eat their own eggs. That is why the plants in the aquarium will act as a natural protection of the eggs.

Before spawning barbs are seated in different aquariums for about a month. The temperature of water should be reduced by two degrees. Feeding of fish during this period is as follows: the DOE should provide mainly vegetarian food, and the male protein. By the way, to distinguish males from females is fairly easy: the females have a more rounded tummy, and they are much smaller in size than males. Tumescent tummy females is evidenced by their willingness to reproduce.

Experienced aquarists notice that for successful breeding, the female should be 3-4 months younger than the male. Spawning at the Sumatran barbs starts the next morning after their reunion in the same container. First, the male will court one female, and when she starts to throw their eggs, he'll be keeping the semen.

Interestingly, the single spawning capable of bringing hundreds of fertilized eggs. Because barbs don't like sunlight, aquarium, meristemic must be placed in a dark place in the apartment. Experts say that fertilization of the eggs can be artificially improved. For the water added quite a bit of salt: 1 teaspoon per 10 liters of water.

At the end of spawning new "parents" should be removed from the tank. Otherwise they can eat their own eggs pending. At a water temperature of +26oC fry will appear on the fifth day. Breeding barbs at home is not only exciting, but also not cause unnecessary trouble and costs.

What to feed the fry of barbs?

Aquarists claim that the best diet for newly hatched barbs will be rotifers, Artemia, infusoria and nauplii. Already a little grown fish is recommended to eat small crustaceans. Young Sumatran barbs is growing quite fast and active, which could lead to inequality: larger specimens will eat smaller ones. In order to avoid cannibalism of young barbs need to sort by size. Provided is plentiful and good feeding at 8 months, these fish become sexually Mature.
Is the advice useful?
Подписывайтесь на наш канал