What is USB OTG cable

Today there is a huge number of different USB cables, each of which has its own advantages and disadvantages. USB OTG cable in turn is a kind of "adapter". 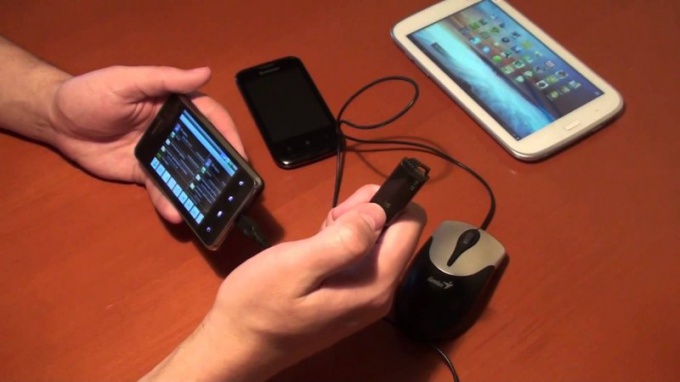 What is USB OTG

USB On-The-Go is a kind of adapter through which the owner of any mobile device can connect to it: keyboard, mouse, hard drives, removable batteries, etc. Thus it turns out that thanks to the USB OTG cable you can literally to turn any smartphone into a computer.

At its core, USB OTG cable very similar to the standard cables, through which charging and data transfer for different smartphones and tablets. On one side the cable has an external USB port, and on the other side a Micro-USB plug. As you might guess, connect any peripherals via USB OTG is possible only to those smartphones and tablets that have the connector for the entrance of Micro-USB.

As for the connection, then some of the problems with this is unlikely to occur. It is enough to set one end of the USB OTG cable into your phone and the other end to attach any peripheral device. After the phone recognizes it, then an appropriate message will appear. Then you can start to experiment with the connection of different devices. For example, the usual utterly keyboard and mouse will bring convenience when working with a smartphone. Joysticks from consoles will allow you to get maximum enjoyment from the games (not all games support such control). Via flash drives you can transfer data to your phone and perform many common tasks with it. In addition, you can connect some removable hard drives and removable battery.
Is the advice useful?
See also
Присоединяйтесь к нам
New advices