Wedding veil: why it is needed

Bridal veil is one of the main accessories in the bride's image. It can be long, passing in train, or short, barely covering the shoulders. If desired, the girl can choose lace or a veil to hide your face under layers. 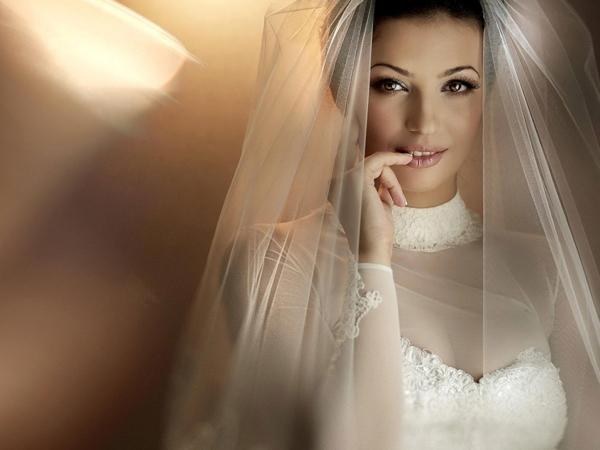 The value of wedding veils

Initially, the veil served as a protection against the impure forces. In Ancient Greece, as it used a yellow blanket in Rome red. In Russia the girl's head was covered with crisp white handkerchief. In those days the veil fully covered the bride's face, sometimes her length reached the toe. It was believed that thus the girl is protected from the evil eye of other people and evil spirits that could prevent the wedding.

Later, the veil began to sew sheer fabrics: silk, lace, etc. to show the beauty of the girl. Only one thing was constant: her length was also at floor level. Covered with a veil, the bride symbolized obedience to her future husband, consented to his dominant role in the family. The white color of the fabric pointed to the chastity of a marriage partner.

Their view of the veil found in the XVIII century. Tradition was gradually forgotten, and now the veil is used mainly as a beautiful romantic accessory. Bride keeps his head covered before the meeting with the groom or the ceremony, reception, keeping the mystery and anxious anticipation from all the guests. After cherished "Yes" to the new husband lifts the veil and establishes the marriage's first kiss.

Some modern bride wedding veils refuse, preferring to live flowers in her hair, short veils and other accessories. Before you make this decision, think carefully when you even get a chance to wear a fly veil.

It is believed that the veil affects the family life of the newlyweds. The longer, the happier the marriage. To reduce the risk of separation, the veil shall be attached to the Hoop closed, for example, the crown.

Don't let anyone try on my veil even after the wedding since it is charged only by your energy. Also it is advisable to wear her own hands, without the help of strangers. If the veil is attached to a hairpin or comb, choose a model with adornments of pearls, rhinestone, embroidery, etc. This will reduce the negative impact of sharp objects.

According to legend, he who will remove the veil from the bride, dominate it. If you want to head the family was the husband, leave this ritual for him. If you wish to bond with a new family, a veil should lift the mother-in-law. But for equality in marriage, remove the veil yourself.

Veil infused with the power girls during the wedding, has magical properties. It is able to protect a newborn baby from the evil eye and spoilage, to cure illness and calm sleep. For this it is necessary to cover the cot, using as the canopy.
Is the advice useful?
Присоединяйтесь к нам
New advices