What are the names of colorful daisies

Daisies with multi-colored flowers does not happen. Usually confused with daisies gerberas are really similar in appearance to a Daisy, but may have flowers of different colors. 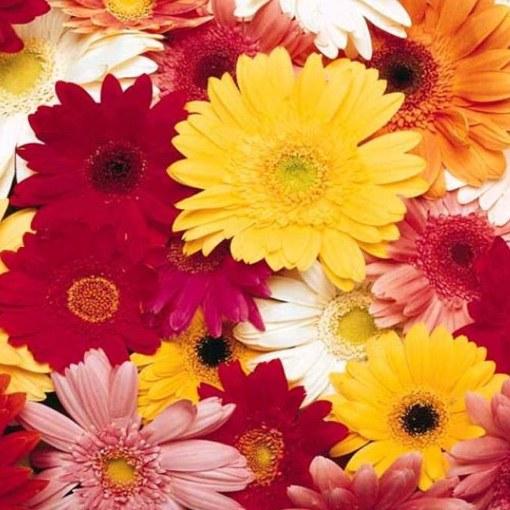 Chamomile is a perennial plant, the flower petals, which are always painted white. If you see on a bed of multi-colored "daisies", it most likely is gerbera.

Externally very similar to the gerbera Daisy. Only the petals of its flowers can be painted in a variety of colors - yellow, pink, crimson.

There are several dozen species of lilies, most of which grows in Africa and Madagascar.

The gerbera was first described by the Dutch botanist Jan Gronovius in the XVIII century. He named the flower after his friend German botanist Reception gerbera. Later, Carl Linnaeus, who dealt with the systematics of plants used this name in his works. From the end of XIX century beginning of gerbera is widely cultivated.

Gerbera, and Daisy is a perennial plant. Unlike the latter, the gerbera leaves are oblong in shape, pointed at the end and grow from a basal rosette. The stalks of this plant can reach a height of 60 cm Flowers are collected in a single inflorescence-baskets. Inflorescences of some species of gerberas can be of diameter up to 30 cm.

Gerbera different duration of flowering. Often a bed of these flowers is pleasing to the eye for several months. Thanks to this feature, gerberas are often used in landscaping of cities and suburban areas.

The cultivation of gerberas

Now, gerbera is mainly grown in the form of hybrids. They are successfully cultivated in almost any climate. Because of the impressive forms of colors, this plant is often used in bouquets. Cut gerbera daisies can survive in water up to 20 days. So they stood for a long time, it is recommended to pour in a vase, only a small amount of water to the stem did not have time to rot.

More than 1000 varieties of roses, each of which differs in the form of the inflorescence and colour of the petals. There are varieties with pink, white, orange, red, yellow, black color colors. Breeders have not yet succeeded to achieve only one color of the petals from gerbera daisies blue. Some Gerber one flower can meet the petals of different colors.

Gerbera prefers to grow in full sun. Water it so that water does not get in the rosette leaves - otherwise the plant will rot and die.

If high gerbera good in a flowerbed, indoors prefer to grow dwarf varieties of this plant. Below the gerbera bloom, it needs the short daylight and good ventilation.
Is the advice useful?
Подписывайтесь на наш канал