Why in the English week starts on Sunday

Many who have learned English in school, I remember the days of the week started from Sunday. Perhaps, then, it seemed that it is easier to teach, but actually it has its historical explanation. 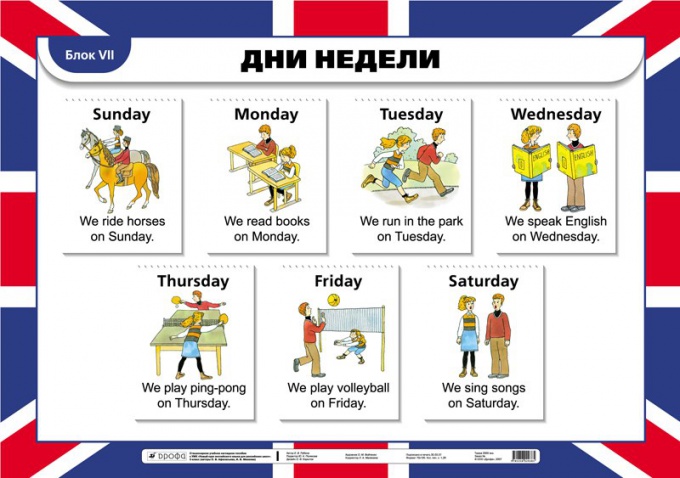 Days of the week in English

There are several ways in which they are easier to remember. For example, assign numbers to days in both Russian and English. We denote as mono Monday - the first single, Tuesday - two - two or the second Friday - five fifth, Saturday - six - sixth, Sunday - seven - seven. However, for Wednesday and Thursday it was impossible to select numbers that will be in tune with this day for weeks. And remember that week in some English-speaking countries starts on Sunday, so there is confusion, because Monday is not the first day of the week. You can also use the words-analogues, but since everyone has their own Association, generic methods there.

As you may recall, went the names of the days of the week in English. At the moment the official version is the origin of the names of the planets. Time used otmechalos using the positions of the heavenly bodies, and one of the time-unit was the lunar month of approximately 29 days and includes four phases of about 7 days each. At that time there were seven known planets, which were named from revered gods. In the English culture influenced the Romans formed these names: Monday - Moon - moon, Tuesday - Tiu - Tiu", Wednesday - Woden - One, Thursday - Thor - Thor, Friday - Freya "Freya", Saturday - Saturn - Saturn, Sunday - Sun - Sun.

Why the week starts on Sunday?

In fact, this is the case not only in England. In addition to the English week of Sunday start for the Americans, the Canadians and the inhabitants of some other countries.

Later the tradition was divided. Many European countries did not share the weekend and began to consider the beginning of the week Monday. North America left the old year.

It is interesting that in the UK there is no single solution at the moment. There is an old tradition that Sunday is placed in the beginning of the week in calendars, but in everyday life it is the Monday becomes the first day of the week and Saturday and Sunday - weekend, that is the end of the week.
Is the advice useful?
See also
Присоединяйтесь к нам
New advices