Traumatic pistols, more and more come into fashion. The population has already taken their protection into their own hands, not relying on law enforcement. And one of the most powerful arguments of self-defense is a traumatic Makarov pistol. 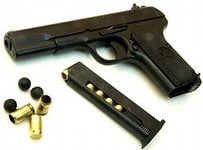 Related articles:
Traumatic Makarov is a weapon of self-defense, designed on the basis of combat models of this gun. Refers to the type of firearms with limited range of destruction.
The differences between tramadol and combat version of the pistol is that in the traumatic version of the original rifled barrel military weapons replaced smoothbore civilian version. Besides the traumatic version, the trunk is equipped with a partition that prevents firing live ammunition. Shooting from a traumatic option can only be fought with rubber bullets.

The advantages of a traumatic Makarov

For the manufacture of a traumatic version of PM come from combat pistols, produced in the fifties of the last century. And it is no secret that in Soviet period for the production of weapons used steel of higher quality than it is now. So doubt the reliability of the gun, no reason.

In more modern models of this gun shop has been increased to 10 rounds, and if you want you can purchase and race with a capacity of 13 rounds.

Without them, too, anywhere, because nothing is perfect does not exist. First and foremost all the fans complain about the weak capacity cartridges. Although the strength of the barrel allows the use of more powerful ammunition.
Also a drawback in the eyes buys is the fact that the gun trigger is excessive. Besides, that would make pistol shot you must make every effort to press the trigger.
Still the disadvantages of the weapons include a very small angle of inclination of the handle, though with some this statement does not agree, it's all about practice.

The biggest drawback of this gun is considered insufficient accuracy when shooting. Higher accuracy is constrained by the low front sight and a rear sight with a small notch.

For some models, the barrel is prone to bloat, especially after the use of more powerful cartridges. Although after the upgrade the gun got stronger stem.
Is the advice useful?
See also
Подписывайтесь на наш канал