His novel "the adventures of Tom Sawyer" by American writer mark TWAIN wrote for an adult audience, but the fans of the books were children. And this is not surprising, because the book is just full of adventure, which dreams of every child. 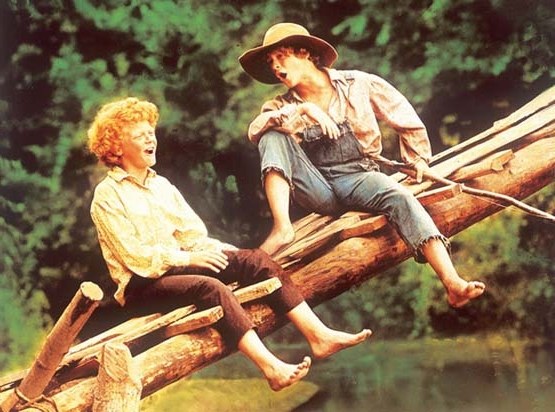 In the middle of the XVIII century in the small town of St. Petersburg Missouri in the house of his aunt Polly lives a boy called Tom. Restless Tomboy, runs away from school to swim in the Mississippi, and will be punished by working for the weekend.

Paint the fence when you walk around mocking friends, rather unpleasant for a proud boy of twelve. Cunning Tom pretends to be happy and completely satisfied with their pastime. Now, his friends envy him and ask to give them this wonderful work in exchange for treasure.

Adventurous boy not only escaped from punishment, but has won 12 of alabaster balls, guns of the coil, collar for dog, piece of blue glass, and many other items that have great value for children.

Love, piracy and the funeral

Blue-eyed daughter of the district judge Becky Techer won the heart of young Mr. Sawyer so much that he accepts her guilt for the torn book and bravely endures a beating from the teacher. A swirl of passion, quarrels, jealousy and now Tom runs away from home. With two friends, the boy decides to organize a gang of pirates.

The boys live on the island, swimming in plenty, fish, and even learn to smoke. After a terrible storm the children really want to go home, but then they find out that they are considered drowned and on Sunday there will be a memorial service. Not realizing the cruelty of his behavior, they decide to go straight to my own funeral.

Bloody tragedy in the graveyard

Tom goes to midnight in the cemetery with the homeless Huckleberry Finn in order to use dead cats and devils to get rid of warts. There they witness a fight between a young doctor, Muff Potter and Injun Joe.

While the Muff is unconscious, an Indian doctor kills him with a knife. Joe then convinces klutz Potter that he killed the doctor. The boys swear each other to keep quiet about the events of that night, because the Indians are known for their vindictiveness.

Meanwhile, the arrest of Potter, he faces the death penalty, because at the cemetery found his knife. Joe is testifying against his assistant. Tom and Huck visited Potter in prison, they feel very ashamed and scared. During the trial, the Fact can not stand injustice and tells the truth.

The Indian runs away jumping out of the window, Potter is acquitted, but Tom becomes a hero. He's in the papers, but he could not sleep for fear of reprisals on the part of Joe.

The idea is to find the treasure, inseparable friends go into an abandoned house. While the boys examined the attic, the treasure found at the bottom of a tramp and Injun Joe. Criminal, is back in town pretending to be deaf and dumb Spaniard, to avenge the widow of his old enemy.

Huck overhears terrible plans Joe and manages to raise the alarm. Saved by Mrs. Douglas of gratitude fathered the boy.

The cave and the end of the "Indian devil"

Tom puts up with Becky and invites her on a picnic. The children spend the day outdoors and go to explore the famous cave of Mac-Dougal. Running away from bats, Tom and Becky get lost in the huge maze.

Tom courageously supported the weakened girl. Leaving Becky in an underground stream, the boy is sent to seek out and bumps into Joe. Fortunately the Indians didn't recognize him and ran deep into the cave. Tom manages to get out of the cave to save Becky.

Residents of the city decided to seal the entrance to the cave. Injun Joe was walled up alive and died of hunger. Tom and Huck later finds a secret hole in the cave and find a treasure of gold coins.
Is the advice useful?
Присоединяйтесь к нам
New advices