What kind of cactus Gymnocalycium?

Cacti are amazing plants. They do not require special care, absorb electromagnetic radiation and at the same bloom. One of the brightest representatives of this plant - cactus Gymnocalycium. 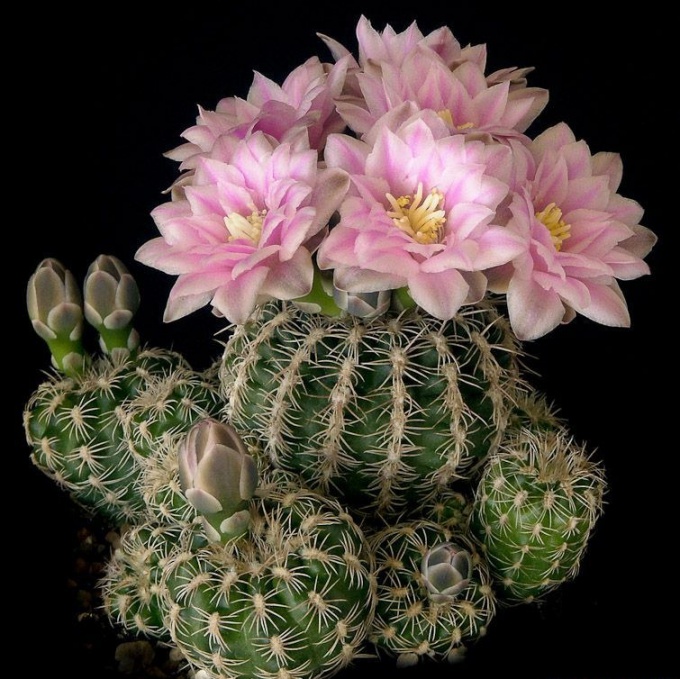 The origin of Gymnocalycium

Cactus Gymnocalycium comes from South America. In the wild it grows picturesque groups, which consist of Mature plants and "children". Gymnocalycium can grow in the lowlands and at altitudes of over 3000 meters above sea level. These genus of cacti includes about 100 species.

The plant has the form of a ribbed ball with spikes. The older it is, the less it becomes thorns, and the ribbing of the barrel is reduced but does not disappear completely. The cactus flowers have white or pink.

One type is Gymnocalycium of Mihanovic. This plant cannot be confused with other, as the barrel it has a bright red, orange or yellow color due to the fact that it cannot produce chlorophyll. Gymnocalycium of Mihanovic is necessary to instill in the stem of another cactus. This species was bred in Japan artificially based on natural mutations, which were exposed to the young plants in 1940.

The care of this plant is the same as for other cacti. Put a pot of this flower is best on a window sill facing South. In too hot days when the sun's rays warm particularly strongly, the cactus needs shading, as it can get burns. Gymnocalycium does not like drafts and stale air. In the summer it is better to expose to the open air (porch, gazebo or balcony), and in other months, regularly ventilate the room in which this cactus is.

The roots of Gymnocalycium not too big, so the pot for him a lot is not needed. Moreover, high capacity cactus will not bloom. Gymnocalycium afraid acidic soil, so be careful that the soil is not soured. Young plants should be transplanted every spring, and adults as needed. The soil for cacti you can buy in specialized stores, but you can make yourself. To do this, mix equal parts sand, peat, humus, turf and deciduous earth. Utensils for Gymnocalycium must have drainage.

Watering this plant is not often. Too wet soil will negatively affect the cactus, he will become sick and eventually die. In addition, the excess moisture in the ground leads to the appearance of pests. Winter Gymnocalycium need to be watered not more than 1 time a month in the fall, you can increase the frequency of watering to 2 times, in spring and summer the plants watered as needed.

Propagated plant lateral appendages, which are in abundance on the trunk of any Mature plant. The Appendix is carefully separated from the trunk and within 1-2 days, dried in a dry dark place. Then it can be directly planted into the prepared ground. To care for a baby need the same as for adult plants.

Not all Gymnocalycium forming processes. In this case, it is possible to grow cactus from seed. Soil for planting should be the same as for adult plants, only softer. Seeds are sown in moist soil, after planting capacity need to close the transparent lid, so that the earth does not dry up. When plants turn 1 year old, can be transplanted into a separate bowl. For the period of germination and maturation of Gymnocalycium it is necessary to provide a temperature of 20 degrees and a moderately moist soil by spraying.
Is the advice useful?
See also
Присоединяйтесь к нам
New advices