Immediately after the sinking of the famous "Titanic", the rich relatives of the victims have organized a campaign to lift the ship from the bottom. This was done mostly in order to bury loved ones and to recover sunken treasure, the value of which exceeded $ 300 million. 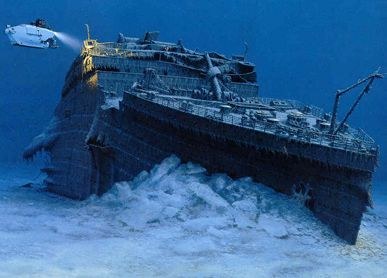 The Sinking Of The Titanic

14 APR 1912 in ocean sank the largest passenger ship of that time – the Titanic. Bumping into a huge iceberg, the ship sank within a few hours. Out of 2207 people died 1496, and the rest picked up came to the rescue to help other ships.

85 years later, Director James Cameron shot the same film based on these events.

Millions of people were able to see how huge and stunningly beautiful was this ship-the city...

Already in 1912, began discussing how to raise the ship to the surface. Funding was sufficient, but there was no such technology through which it would be possible to implement it.

And this idea for many years refused.

In 1966 a project to find and raise the Titanic was headed by the Englishman Douglas Wally. It was supposed to find the exact place of occurrence of the liner on the bottom. And then to raise it from the depths morskich.

Plans for the recovery of the Titanic to the surface

Discussed various ways to raise the vessel. To impose housing nylon cylinders and fill them with air.
To freeze the entire ship from the inside, so he turned into a piece of ice, floated to the surface.

Even offered exotic options such as filling the entire body balls ping-pong table, so he obtained the necessary buoyancy.

Called different the amounts necessary to raise the Titanic to the surface. From 6 to 12 million dollars. But such investments have been fully self-supporting, since according to the documents, it took jewelry worth more than $ 300 million.

"Titanic" will remain at the bottom forever

Only in 1985, after numerous failed attempts, the Titanic was discovered at the bottom and filmed the underwater device AGNUS developed with the U.S. Navy.

The results of the surveys showed that the ship broke apart, its fragments scattered in a diameter of more than 1600 meters. Feed were separate from the bow at a distance of 800 metres. After careful study of the situation, scientists came to the conclusion that any attempt to raise from the bottom of the hull will lead to its complete destruction.

So was abandoned all attempts to raise the Titanic to the surface.

But over the next 6 years the company RMS Titanic, the official successor of the remains of the ship and all its contents, was carried out 6 expeditions, which were extracted from the bottom of the various items that were on the "Titanic", the total cost of which amounted to 189 million dollars.

15 APR 2012 all the wreckage of the ship came under the protection of UNESCO as underwater cultural heritage monument.
Is the advice useful?
Подписывайтесь на наш канал