All about the rainbow as a physical phenomenon

Rainbow is one of those unusual optical phenomena, which nature sometimes delights the person. Since ancient times, people have tried to explain the appearance of the rainbow. Science is a significant step closer to understanding the process of the emergence phenomenon when in the middle of XVII century the Czech scientist mark Marci found that the light beam is inhomogeneous in their structure. Later Isaac Newton have studied and explained the phenomenon of dispersion of light waves. As we now know, the light ray is refracted at the boundary of two transparent media with different density. 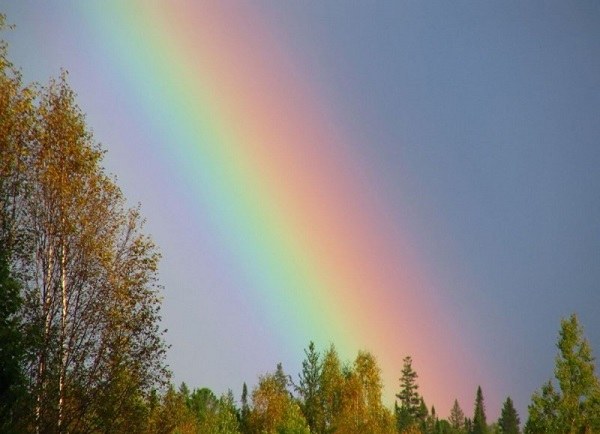 Related articles:
Instruction
1
As established by Newton, white light beam produced by the interaction of rays of different colors: red, orange, yellow, green, blue, Indigo, violet. Each color is characterized by a particular wavelength and frequency. On the border of transparent media the speed and the wavelengths change, the oscillation frequency remains the same. Each color has its own refractive index. Less just from the previous direction does deviate a beam of red light, a little more orange, then yellow, etc the Highest refractive index has a purple beam. If the path of the light beam to install a glass prism, he not only rejected, but will split into several rays of different colors.
2
And now for the rainbow. In nature, the role of the glass prism perform raindrop faced by the solar rays in passing through the atmosphere. Since the density of water greater than the density of air, the light ray at the boundary of two media is refracted and decomposed into components. Next, color the rays moved inside the drop, before the collision with the opposite wall, which is also the boundary between two media, and, moreover, has mirror properties. A large part of the light flux after the second refraction will continue to move in the air for rain drops. Some of it will reflect off the back wall of the drop and will be released into the air after a second refraction on the front of its surface.
3
This process occurs immediately in many drops. To see a rainbow, the observer must stand with his back to the Sun and face the wall of rain. Spectral rays come from raindrops at different angles. From each drop in the eye of the observer gets only a single beam. The rays emerging from the neighboring drops coalesce, forming a colored arc. Thus, from the top drops in the eye of the observer are the rays of red color, from those below – orange, etc. more likely to leave violet rays. Purple line is the lower. A rainbow in the shape of a semicircle can be seen when the Sun is at an angle not more than 42° relative to the horizon. The higher the Sun rises, the smaller the size of the rainbow.
4
Actually, the described process is somewhat more complicated. The light beam is repeatedly reflected inside the drop. This may experience not just one color arc, but two – a rainbow of the first and second order. The outer arc of a rainbow of the first order red color, the interior in purple. The second order rainbow on the contrary. It looks usually much paler than the first, because in case of multiple reflections the intensity of light decreases.
5
Much less in the sky can be observed three, four and even five colored arcs at the same time. This was observed, for example, residents of Leningrad in September 1948. This is due to the fact that rainbow may also occur in the reflected sunlight. Such multiple color arc can be observed over the vast water surface. In this case the reflected rays coming from the bottom up, and rainbow could be "turned upside down".
6
Width and brightness of the color stripes depends on the size of droplets and their number. Drops with a diameter of about 1mm to give a wide and bright purple and green stripes. The smaller the drops, the weaker is highlighted by a red stripe. Drops with a diameter of about 0.1 mm do not give the red band. Droplets of water vapor forming fog and clouds, a rainbow will not form.
7
To see a rainbow not only in the daytime. Night rainbow is a rare phenomenon that occurs after a night of rain in the side opposite the moon. The intensity of the color night rainbow is much weaker than the daytime.
Is the advice useful?
Подписывайтесь на наш канал