Where is the famous mount Athos

Mount Athos – the calling card of the Peninsula of Halkidiki in North-Eastern Greece. The Peninsula jutting South-eastward from the mainland, and with the deepening in the Aegean sea, its flat terrain gives way to hills and rocks. The rocky mountain chain crowning the Agion Oros (Holy mountain) – the mountain Athos rising 2033 m above sea level. 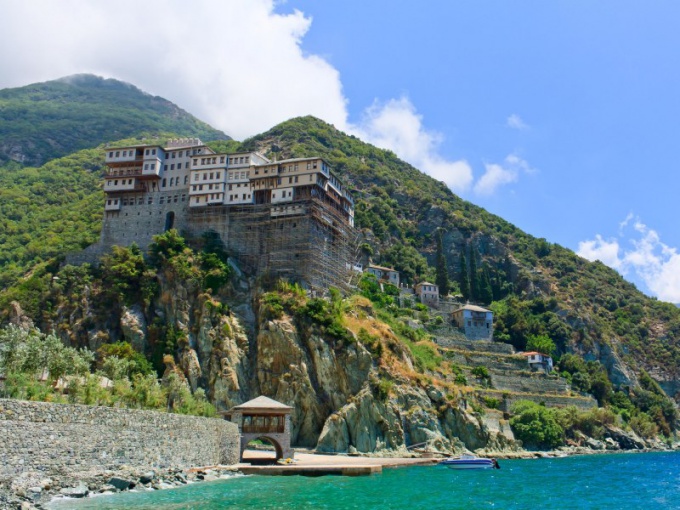 Related articles:
In addition to mount Athos, a feature of Chalkidiki is the presence of the deepest abyss of the Aegean sea (Delta 80-1070 meters).

Interestingly, the Peninsula is also called mount Athos and is an independent administrative unit of Greece (officially called the Autonomous monastic state of the Holy Mountain). There are more than 20 Christian monasteries and many churches, it is considered that this area is the inheritance of the Holy mother. Nevertheless its name to the mountain owes to the ancient Greek hero – giant Athos, Mutnovsky rock against Poseidon (one of the legends mentions that the mountain is the tomb of Poseidon).

A later tradition says that in 49 BC beauty so impressed the virgin Mary that she asked for permission from God to this earth. The request was granted, and since then, there is a lot of virgin Mary, where she created beautiful gardens and a Marina for all seeking salvation.

A mild Mediterranean subtropical climate is conducive to lush growth of vegetation. The whole Peninsula is covered with forests and fields with lush vegetation. Vineyards and olive groves alternate with oak and coniferous forests, orchards grow apples, pears, citrus, walnuts, cherries. With the exception of the rocky spur, located in the southern part. In the vicinity of the Holy Mountain a lot of sycamore trees, and with increasing elevation of their groves go into the Moors.

Mount Athos is included in the UNESCO world heritage site, but not everyone will be able to meet all its shrines. The fact that the monastic community prohibits the entry into its territory of all the females, including not only humans but also animals. It turns out that it is women closed the road to the greatest example of womanhood – the virgin Mary.

Even if you are a man, get to the Holy Mountain will be difficult – every day there allow no more than 120 people have received a special permit (visa). So the best way to see all the monasteries were the boat trip around the Peninsula. But if you do decide to land on pilgrimage, note the Russian monastery of St. Panteleimon and one of the oldest churches of the Dormition of the Theotokos (335 g). Also be sure to visit the Great Lavra (960 g) and Vatopediou (972) – is the largest monasteries of the community.
Is the advice useful?
See also
Подписывайтесь на наш канал