How to do scales at home

Sometimes the house accumulates a lot of different stuff. This stuff can be thrown out, but you can make it a very useful little things, such as scales. The kitchen is often required for complex recipe to measure out small quantities of ingredients. If you are doing chemical experiments, then there's no exact weight of a substance you can not do. 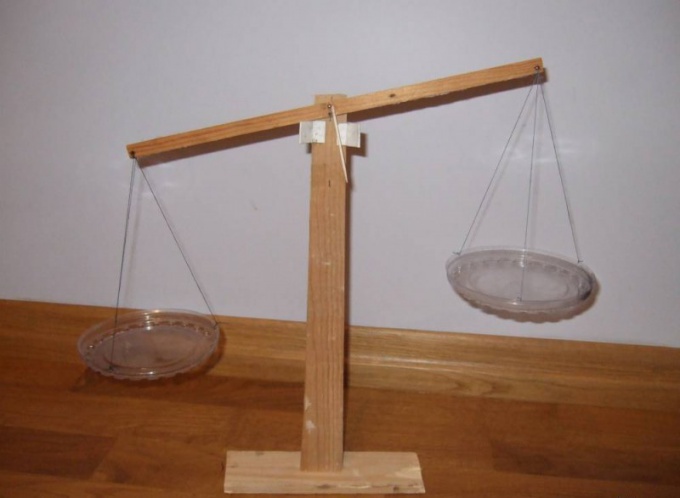 Related articles:
Scales are ravnovesie, shoulder, lever, and electronic. To make the first three types of weights are fine and what you'll find at home: a clothes hanger, a ruler, a spoke from a broken umbrella, used cover and more, that in principle you do not need. But the establishment of the electronic scales is quite complex. To make the electronic scale may require the use of strain gauges, inductors, transformers and similar devices, which is certainly just the sort of rubbish is not lying.

Ravnovesie scale in appearance resemble a swing. So for production you will need a straight bar for shoulders. The role of this strap can run a normal line of the spokes from the umbrella and any other straight stick.

The edges of the strap to attach the bowl. For these purposes, you can use any two of the same capacity. It might be traffic from beverages, metal lids for canning, measuring cups, etc. At the edges of these containers should be three equidistant from each other holes and attach of thread, fishing line, thin wire.

The center plank should be glued (or welded) perpendicular to another rack, only shorter. This arrow will show the trim of the shoulders weights. For these purposes, you can even use a needle. Your scale is ready, it remains only to strengthen them on any stand, for example, be hung on a hook on a vertically mounted rail.

Shoulder scales are good that allow you to measure not only absolute weight but measure the amount, for example, the granular composition. The main difference of these weights from ravnopolska that the Cup can move along the rail and installed in different points relative to the suspension.

As a strap for such weights it is best to take thin reechku. Hang it on the hook. If the rail is too thin, it is better to do it in the middle groove, not a hole. The same make and arrow-a needle that will indicate the deviation of the weights.

From the point of suspension in both directions, measure equal distance, numbering them as deleted. In places the marks you can make a dent to the scales does not slip on the bar during the weigh-in. Bowls made like ravnopolska weights, but they are not fastened to the edges of the strap and hung. When weighing use of reverse proportionality: L1/L2 = M2/M1.

Lever scales are also easy to perform. In order to do this, you will need any platform, tripod. Lever and a Cup for weight. On a tripod with screws attaches the lever to one side of which is fastened a Cup for weighing. The other side of the lever is arrow weight. Empirically you set the dividing weight.

Kettlebells can be purchased in the store. A kettlebell can serve as tablets that have a clearly weight marked on the package. In addition, as weights you can use regular coins, setting them empirically accurate weight.
Is the advice useful?
See also
Подписывайтесь на наш канал