The history of the group "Ranetki"

"Ranetki" - female rock group, which burst into show business. Glory they brought a soundtrack to the TV series "kadetstvo" and then the series on the TV channel "CTC". During its existence "Ranetki" became laureates of the contest "Five stars" and "Eurosonic 2008", received 2 awards "Muz-TV" in 2009 ("Best soundtrack" and "Best album"). Technically, the band broke up in 2012. 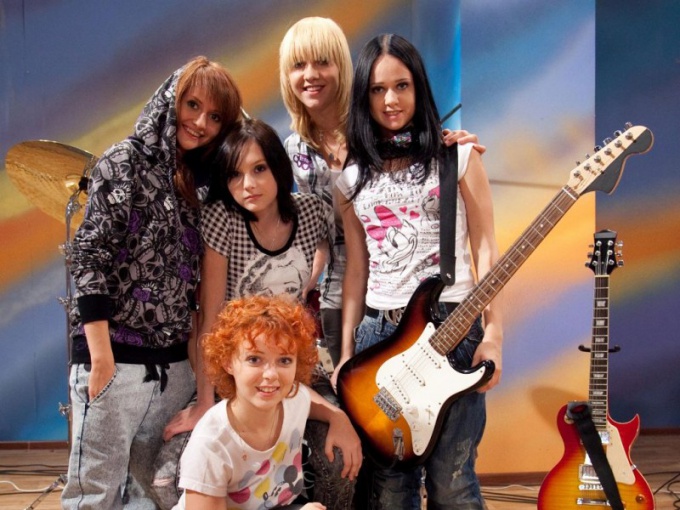 The first group consisted of 6 people: Alina Petrov, Lena Halperin, Anya Rudnev, Natasha to Shchelkovo, Eugene Ogurtsova and Lera Kozlova. Girls were selected in the draft as a result of prolonged casting. At the end of 2005 Lena Galperina left "Ranetok" and in its place came Lena Tretjakova. Few weeks from participation in the project was abandoned and Alina Petrova. August 10, 2005, the group "Ranetki" was officially registered. Anya Rudneva, Natasha Shelkova, Zhenya Ogurtsova, Lera Kozlova Tretyakov and Lena sang together and recorded albums until November 1, 2008, and then the drummer Lera decided to start a solo career. It was replaced by Anne of Baidauletova a well-known TV contest "STS lights superstar-2". In November 2011 Anya Rudnev decided to leave the band.

Formally in the group are still listed:

Natasha, Melnichenko (Shchelkovo) was born 6 APR 1990 in Moscow. Natasha in childhood seriously studied in the school of figure skating Ilya Averbukh, but then realized that he wanted to devote his life not sports, and music. In 2009, the girl was married to the producer of group "Ranetki" Sergei, Melnichenko. The group takes backvocals party, plays guitar.

Zhenya Ogurtsova in the band plays keyboards and sings. She was born March 29, 1990 in Moscow. Started music at the age of three. It is believed that it was her idea to create the group "Ranetki". Creativity time Jack likes to snowboard.

Lena Tretyakov. Born on 23 December 1988 in the Polish town of Legnica. In the band plays bass guitar solo in some songs. After the birth of her daughter Lena's parents soon moved to Moscow. When she was a professional kickboxing and football, playing for the team "Chertanovo". Lena has no musical education. The first chords on the guitar, showed her brother, and the rest had to learn.

Anna Nuta) Baidavletov. She was born on 26 November 1992. In childhood Nuta lived in Stavropol learned to play the accordion, piano and guitar, went to art school. To engage seriously with the music it led the band Tokio Hotel. In a group of Nine Lives Nuta "lit up" on "STS", and then was invited to the group "Ranetki", where he began to play drums and perform a number of solos.

Officially, the band "Ranetki" still exists, but in fact each of the participants engaged in solo career.

The most popular of the group's songs are the soundtrack to the TV series "Kadetstvo" and "Ranetki". In 2010 the band released the single "Tears of ice". On account of "Ranetok" 11 videos. A special milestone in the history of the group is the series "Ranetki". The creators of the series "kadetstvo" decided to make a movie about teenage girls. 17 Mar 2008 this project was launched. The storyline of the series is based on the biographies (sometimes real) five high school girls, which in a series of school routine find time for music. Lera Kozlova, Anna Rudneva and Natasha Shelkova starred in one episode of "Happy together". One of the biggest achievements of the group, according to its participants, is performance as the opening act for Britney Spears on 21 July 2009.
Is the advice useful?
Подписывайтесь на наш канал