Fashion is a thing changeable, and during the 19th century underwent many changes. The trendsetter was France. In Russian secular society considered good form to speak French. Outfits were ordered from Paris. Keepers of the Russian national costume remained peasants. 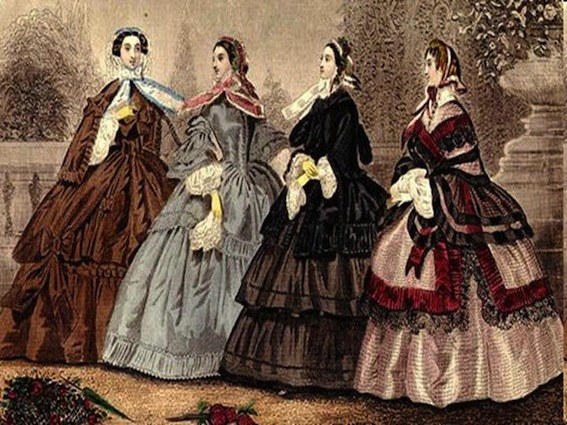 The main fabrics for the peasant dresses of the century was self-sewed canvas and coarse hair. In the 1840-1850 years, homespun material displaces factory manufactory with a striped, plaid, floral. Outfits southern and Northern regions slightly different, but the basic elements of women's dress was similar:
pinafore;
− paneva;
− shirt straight cut;
− suspen.

Shirts were decorated with embroidery on chest, hem and bottom of sleeves, they were worn with dresses of solid fabric.

The male costume consisted of a shirt-blouse and narrow trousers from krashenina or canvas. Outerwear was the coat or Kaftan with zipper on the left side. In winter wore sheepskin coats nagol'noe.

At the end of the century, people's clothes appear form a city suit. It coats and blouses with peplum, made of satin, iridescent taffeta, satin, and bright, saturated colors.

Bills of sale and clothing of the citizens was a mixture of folk dresses with elements of European fashion. The costumes were struck by the splendor and diversity. A must-have accessory was a costly lace shawl or carpet. Taste and Philistine became synonymous.

In the men's outfit is dominated by the traits of restraint, solidity. The range of apparel includes coats, made of the expensive French cloth, cut at the waist coats, long coats merchant. Popular outerwear:
Russian coats;
− overcoat with a Cape;
− fur coats;
coat.

This traditional Russian clothing supplemented by a modified fashion details: zip on the right side of the neck .

Fashion of the 19th century in the secular salons

If the clothes of the peasants and citizens were simple and unassuming, the upper class can afford chic outfits. In 1805-1810 the years, women's fashion is not complicated forms. At this time prevails in the Empire style. Ladies wear dresses with an Empire waist. Muslin, crepe, lace is the most popular materials.

Russian ladies are not blindly imitate the French style, their outfits are more modest, more refined. The boldest fashionistas include in their robes, items of folk costume. Russian style gradually displaces from the expanses of Russia French fashion.

In the mid-19th century to replace the simplicity come draped with heavy fabrics. Back into fashion corset, lifting the chest and drawing the waist. The image of a society lady, "Pushkin's time" − open shoulders and the bell skirt. The smocking, ruffles, borders, bows – these are the distinctive elements of the outfits 1840-1850 years. Popular at that time was a lace Cape, borrowed by the Russians from Spain. In the cold season wore quilted padded or fur coat.

Fashion is changing rapidly and for the years 1870-1890 there is a new model, tightly fitting hips. Hoop skirts are replaced by pillow-bustles. In Vogue are costumes with skirts, gently fitting mill and flared. The tendency towards simplification of the costume.
Is the advice useful?
Присоединяйтесь к нам
New advices