How to use candles "Hexicon"

"Hexicon" is an antibacterial agent, effective against gram-positive and gram-negative bacteria and protozoa. The active substance is chlorhexidine digluconate. 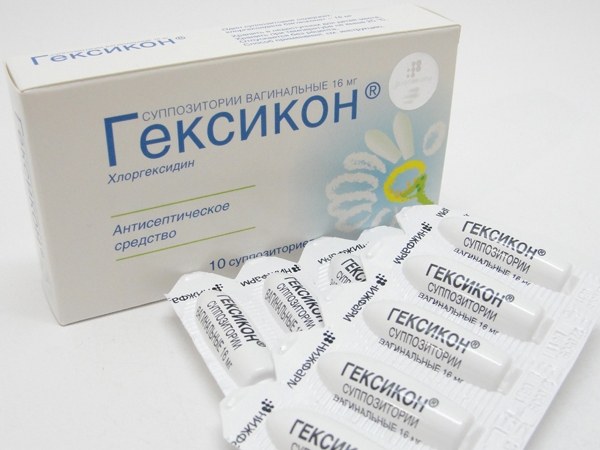 Instructions for use of the "Hexicon"

"Hexicon" is produced in the form of suppositories for intravaginal use. The drug is prescribed for the treatment of infections caused by chlamydia, gonococcus, Treponema, Ureaplasma, trihomonadami, and also to prevent these infections. The drug does not affect the included in the composition of the normal vaginal microflora lactobacilli. Viruses, fungi, acid-fast bacteria bacterial spores are resistant to "Geksikon. The tool has a spermicidal effect, it can affect sperm, disrupting the permeability of their cells, so candles Hexicon can be used as a contraceptive. The drug can be used as a preventative treatment before surgery in the pelvis (including abortion, diathermocoagulation of the cervix, introduction of intrauterine device). "Hexicon" is also given to pregnant women before delivery in the prevention of genital infections.

Candles Hexicon" we need to enter deeply into the vagina one or two times a day for one thing. The duration of treatment to seven to ten days. According to indications, the course of therapy can be extended for up to 20 days. For the prevention of sexually transmitted diseases, the candle "Geksikon" you need to enter no later than two hours after unprotected sex. To prevent unwanted pregnancies candles administered five minutes before sex. Despite the fact that the tool is valid for four hours, with repeated sexual act requires the use of a new candle. To improve spermicidal effect, it is recommended to use candles "Geksikon" together with means of intrauterine or vaginal diaphragm. After intercourse is not recommended douching with soap and water.

"Hexicon": side effects and contraindications

"Hexicon" can cause itching of the genitals after use. This symptom disappears after discontinuation of the drug. "Hexicon" is contraindicated in case of hypersensitivity to the components. Do not use the medicine simultaneously with the personal hygiene, which is composed of a substance group anionic – sodium lauryl sulfate, carboxymethyl cellulose sodium, and saponins.

Caution tool used in children, in this case it is recommended to use the "Hexicon D (8 mg). Allowed the use of the drug in pregnant and breastfeeding women, as it is poorly absorbed into the blood. The toilet of the external genitalia does not affect the tolerability and efficacy of candles Hexicon". The activity of the active substance is reduced if the vagina there is blood or pus. "Hexicon" is sold in pharmacies without a prescription.
Is the advice useful?
See also
Подписывайтесь на наш канал