How many eyes a spider

Spiders – animals with unusual appearance. Someone they seem daunting, others love them and even contain house. What they can not refuse, so this is unusual. Even the number of eyes a spider differs from that of most animals. 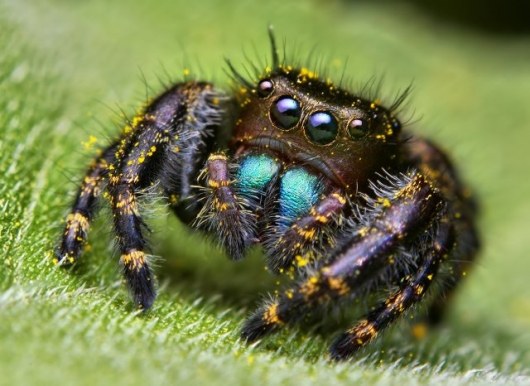 Pairs of eyes of the spider

The spider may be a different number of eyes, depending on the species to which it belongs. Their number able to vary from two to twelve. Some arthropods are altogether without organs of sight. For example, cave spiders, all of his life conducting in the dark, the eyes do not possess, as they are simply not needed.

Although most spiders there are eight eyes arranged in two rows, the vision in the lives of these animals plays a major role, and in spite of such a number the visual organs, they see poorly. Spider, able to see the subject at a distance of thirty centimeters, can no longer be considered sharp. However, the vast majority of spiders and does not require good eyesight. They spin webs, where and are waiting for their prey.


That a mosquito or a fly caught in their nets, these arthropods are known by vibration of the web, which creates flutter the victim.

The structure of the eye of the spider

The many eyes of the spider do not work the same way. The middle pair of eyes usually has a large size than an extension of the eye. The main organs of sight are deprived of mirrors, which reflect sunlight, but are attached to the muscle bundles, through which the eyes can move. The lateral organs, on the contrary, equipped with mirrors, but no muscle bundles.

Apparently, this is because the eye perform different functions: front hunting species follow prey, and the side – watching the approach of danger.

There is, however, a group of spiders that have extremely sharp vision. This stray jumping spiders that do not sit on the ground, waiting for their prey, but actively engaged in its searches. The sight of these arthropods in the acuity comparable to that of the human eye. In addition, they are able to distinguish colors, which is not typical for such a primitive animal.

The horses have well developed eye muscles, allowing these animals to track their prey, and the main eyes have a large lens and a few are extended in length like a telescope. Lateral eyes allow stray spider to capture the movement from the side, behind and above him. Despite the fact that the eyes of this spider's eight, and they have different functions and show a different picture, together they act as a cohesive visual apparatus, ensuring the survival of these small animals.
Is the advice useful?
Присоединяйтесь к нам
New advices