Mens Thong is a variation of underwear with wide open buttocks. It just so happened that men who wear thongs, most often considered gay. However, such an attitude to such a Frank Belew was not always the case. 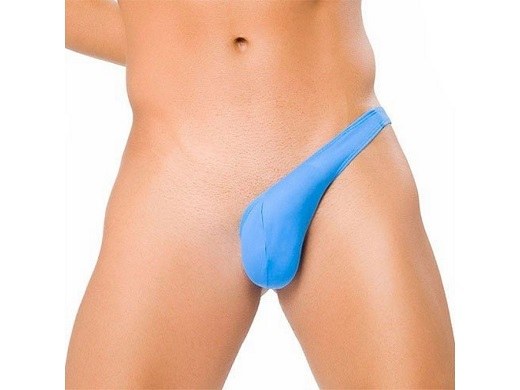 Related articles:
Like women, men tend to decorate their body, to make it more attractive. Underwear very well reveals the character and shows just how candid people can be.

It turns out that the Thong was invented in ancient times. In those days they were very popular in men. It is believed that the Thong originated from loincloth was used by the representatives of the stronger sex to protect the genitals from damage and dirt. Later, approximately in the XIX century, was invented the jockstrap - cotton pouch designed for the same purpose. At the end of the XX century g-string, as underwear began to gain popularity. Today, they are quite relevant and popular underwear for men.

There are two types of panties: G and C. the Difference is that G-model is similar to the female version, that is a triangle or strip in the back. Many men use this type of pant in everyday life, especially on vacation, to form a beautiful tan. C-model is attached to the body by the silicone inserts in the crotch area. This option is often used for a strip performances, photo shoots or body painting. It should be noted that the material used for sewing nylon or spandex.

Despite the outward ease and comfort, urologists do not suggest to wear this type of underwear, as the fabric does not pass a sufficient amount of air can cause diaper rash and rubbing.

Harm or no harm?

According to a study conducted by adult social network, it was found that, of the 966 respondents, men Thong wear 585, do not wear 164 217 and want to wear, but shy. Thus, the obvious conclusion - strings men like me. However, it should be viewed from the other side. Sexuality and convenience on one side of the scale, and on the other the harm caused by common wear. First of all, strings can cause irritation to the delicate skin, and cause mechanical damage to the genital area. During long-term continuous wear blood supply of the genital organs is disturbed, as a result, you may experience problems with erection or duration of sexual intercourse. If the diseases of the rectum g-string is generally contraindicated, because the skin of the perineum is constantly injured, and there is a high risk of infection.

The appearance of external hemorrhoids do not use a Thong, even for a short time. The friction instantly occurs the infection of the nodes, which leads to very undesirable consequences.

Wear lingerie of this type only with a healthy sexual organs and be sure to give your skin a break by wearing underwear made from natural materials.