How to choose a fire extinguisher in the car 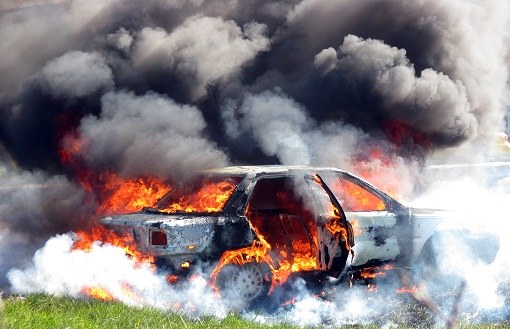 From what we can choose or the types of fire extinguishers

Water fire extinguishers (S) are more suitable for extinguishing facilities. Convenient that precipitated the lungs, rising from the fire particles and cool the fire. They can be used to extinguish electrical devices at a distance, but with combustive-lubricating substances water can't handle. Therefore, the type of OS for the machines does not work, it won't extinguish the fire in the engine or fuel tank.

Air-foam (AFP) fire extinguishers extinguish combustive-lubricating liquids and solid objects in the initial phase of the fire. AFP is used on filling stations and companies, but for the car they also will not work, because when extinguishing electrical equipment under voltage, fire may increase due to the chemical substances in the foam. And quite possibly a short circuit in the wiring.

Burning electrical equipment is energized extinguish carbon dioxide fire extinguishers (OU). It is an effective fire extinguishers used in the fire of any strength, they cope with gases, liquids, and solids. Carbon dioxide does not leave dirt, and therefore this type of extinguisher is used in business centers, offices, Packed with equipment, museums. There are portable OU, however, in the car, their use is inconvenient, because it requires special clothes and a mask, otherwise you can poison until paralysis and burns.

Cheap fire extinguishers not having a pressure gauge, work by a chemical reaction that pushes the powder out. So they are triggered immediately, after activation you have to wait a while.

A new kind of fire extinguishers, which also can be transported in the car in case of fire - air-emulsion (CEE). They are considered safe and environmentally friendly, secondary damage is practically not applied. Extinguish all substances except burning metals, and have a long service life – up to 10 years. EIA also issued a volume of 2 liters and equipped with a modern compact look.

Most cases of ignition of the car is the engine compartment, at least a fire erupts in the cabin and very rarely in the trunk and on the chassis. The cause may be wrong the wire is too powerful audio system, peretirka old wire insulation, not extinguished cigarette or arson. In the case of thick smoke from under the hood should quickly pull the lever that opens the hood, and the hood can be opened slowly and carefully, preferably with gloves. The fire extinguisher must be readily available. Check in the pressure gauge, if everything is in order – we break the seal, pull out the pin and push the lever.

A fire extinguisher is safer to store in the trunk, but if he is in the cabin, it should not be free to roll. It requires a pin to avoid accidental activation.

In the case of rapid fire detection, a rapid response of the driver and if you have a good fire extinguisher dangerous the problem can be localized without the aid of intelligence agencies.
Is the advice useful?
See also
Присоединяйтесь к нам
New advices