How to prepare a tincture of aloe

Aloe Vera is a widely known medicinal plant, called in the life of the agave. It is used in various inflammatory processes, wounds and burns, for strengthening the immune system and even in tuberculosis. It is important to know exactly in what form to use aloe and to prepare tinctures based on it for maximum effect. 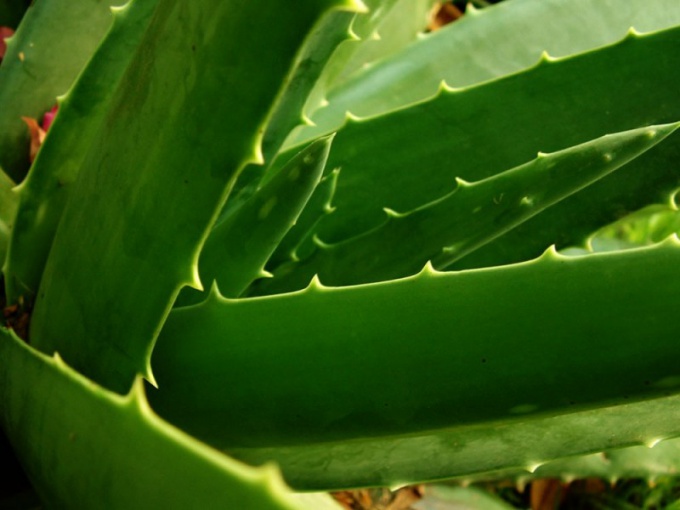 Related articles:
Instruction
1
Cut the leaves of aloe and put on one and a half weeks. Store leaves in the refrigerator wrapped in dark paper. In a tincture it is important to use pre-cut sheets, because in them the concentration of biologically active substances in the future to favorably influence the organism increases in several times. This is because, in such adverse conditions, the plant devotes all its forces to the maintenance of life, and its cells form so-called biogenic stimulators.
2
Take the aged in the right conditions, aloe and grind it. This can be done both with a knife and a blender.
3
Pour the crushed aloe Vera 70%-alcohol solution or vodka in the ratio of one to five. Closed containers with the resulting solution insist in a cool dark place not less than ten days.
Cooked this recipe tincture can be used as a lotion for oily skin to improve digestion, increase appetite, stimulation of protective systems of organism (one teaspoon 2-3 times a day for half an hour before meals).
4
Use preparations of aloe for chronic bronchitis and pneumonia. Take 5-6 leaves of aloe, 0.5 kg of honey, 2 tbsp vegetable oil, 1 Cup birch buds and 3.5 tbsp lime color. Soak the leaves in the refrigerator for at least 10 days. Crush them.
5
Melt the honey and pour over crushed aloe. Cook the mixture on a water bath for about 15 minutes, stirring constantly. Cool.
6
Crush birch buds. Fill them with lime colour a half liters of boiling water, cook for 10 minutes on low heat. Remove from heat, strain through cheesecloth and squeeze.
7
A decoction of the kidneys pour in the cooled honey mix, add the oil. Take the mixture a tablespoon twice a day before meals about 2 weeks. The mixture was stored in the refrigerator before use, shake.
Useful advice
Aloe is not always necessary to apply the settings. The leaves themselves are healing. Them, for example, can be applied to the ulcers for the early breakthrough. Also to wounds for healing.
Is the advice useful?
See also
Присоединяйтесь к нам
New advices