How to draw an anchor

The anchor has always been considered not only a symbol of navigation and ships, but also a symbol of protection and reliability. You can try to draw a real ship's anchor entwined with a snake and use it as a thematic symbols or for decorating any cards, collages and art installations. 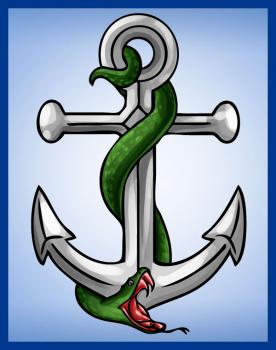 Related articles:
Instruction
1
The basis of the shape of the anchor is the cross. Draw two mutually perpendicular lines forming a cross, so that the horizontal bar was just above the center of the long vertical arms.
2
Your cross split into four segments. At the top of the vertical segment, draw a small circle – it will be the top of the anchor ring, through which prodelyvat chain. The bar should pass a vertical axis through the center of the circle.
3
In the lower segment of the cross, draw an arc-a semicircle, a Central point which also coincides with the axis of the cross. Sketch around the vertical arms of the cross curved line, resembling a snake shape. In the lower part of the line mark the outlines of the head of the snake.
4
More details draw the lower part of the semicircular anchor around the auxiliary lines draw the basic outlines of it, and on the ends of the left and right hook, draw a sharp serrated lugs elongated.
5
Now draw the upper part of the armature, and the ends of the horizontal rungs draw the rounded tips. Work through the shape of a snake, give her body volume. Inside the top of the circle, draw another circle, forming a ring and inside the ring, place the tip of the tail of the snake.
6
Inside the vertical part of the anchor and draw a vertical line and drill the head of the snake – draw the mouth, eyes, tongue and teeth. Anchor proof volume with a cross-hatch, draw places highlights. Erase unnecessary construction lines. Your anchor is ready!
Useful advice
If you teach your child to draw the anchor will ask him to take a sheet of paper and repeat the application of the contours of the future anchor for you. Pronounce each of the lines that the kid was able to remember the sequence of drawing. You can also offer him to paint a finished picture, as well as to complement its other marine subjects.
Is the advice useful?
Присоединяйтесь к нам
New advices