How can I participate in the tomato battle of La Tomatina

The famous tomato battle LaTomatina is held annually on the last Wednesday of August in the small Spanish town of Bunyola, which is located near Valencia. This is a fun and slightly crazy event brings many thousands of people from all over the world. Many people come here every year just to feel like a child that no one will scold if he's a little pohuliganit. 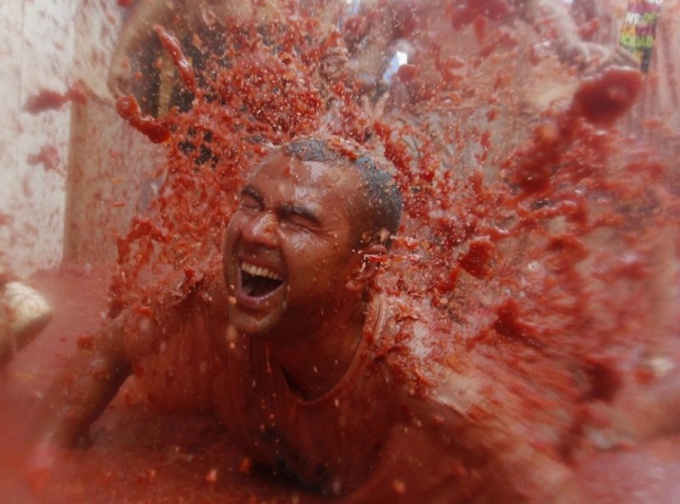 The history of the festival LaTomatina or "tomato battle" began in 1944 with the quarrels of a few friends. Strife was next to a vegetable shop and ended with the warring parties, on a whim, pelted each other with tomatoes. Friends, of course, immediately made up, but a fun spectacle, attracted to the area half the town, it was decided to repeat next year.

So the tomato battle has become a fun tradition and an occasion for tourists to arrive in late August in buñol, although initially the police and the residents of the houses located in the Central square, was against the festival. And they can understand. However, every last Wednesday of August, at 11 o'clock in the morning there is a loud shot from a water cannon, which starts the battle of the tomatoes. On the second shot, in exactly one hour, the battle stops and all go to bathe and drink the local wine, "Sangria".

If you wish to participate in the tomato battle LaTomatina and with 40 thousand people to throw about 120 tons of tomatoes brought to the area a few trucks in advance take care of visa. Then buy a plane ticket to the closest airports, located in Valencia, Malaga or Alicante. In that case, when you arrive just before the festival, to go to buñol by bus is unlikely. Take a taxi to the town, the trip there and back will cost 100 euros.

Within the festival will be on the train, it is the most popular and cheap transfer. If you come from Valencia, the train station can be reached by metro. This stop is Sant Isidre. A ticket on the train should be bought in advance, otherwise you'll have to stand in line for about an hour. Leave early to get to buñol by 11 o'clock. By the way, this day the city is closed to private cars, therefore the car, if you arrive at it, will have to leave the neighborhood.

The festival participants are forbidden to carry sharp and hard objects, glass bottles. The better to wear old clothes then is not a pity to throw out and bring with you a spare. Feet – shoes or sneakers, any shoes that won't subside. And don't forget to buy goggles, they are necessary to protect the eyes from tomato juice, especially if you wear contact lenses.