As the number to subtract a fraction

The number written in the format of fractions, contains information about how parts should divide the whole (denominator) and how many parts (numerator) is present in fraction value. An integer can also be converted into a fractional format to simplify mathematical operations involving integral and fractional quantities, such as the operation of subtraction. 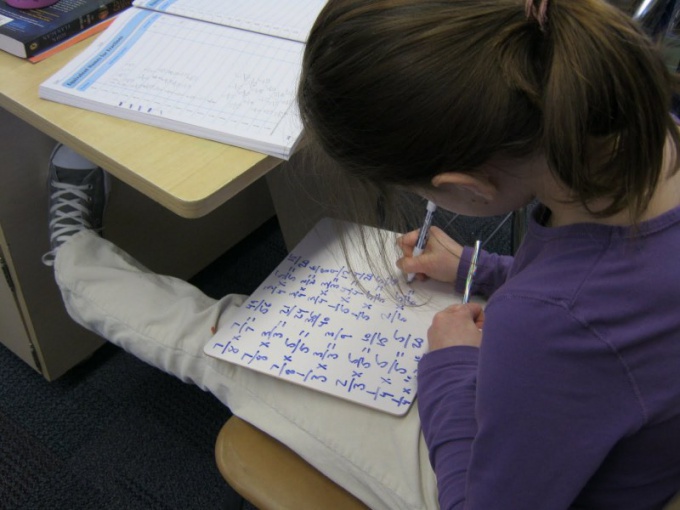 Related articles:
Instruction
1
Translate integer - "minuend" in the format improper fractions. To do this, in the numerator, put the number itself, and as a denominator, use one. Then bring the resulting ratio to the same denominator, which is used in the other shot - in "wikiteam". Do this by multiplying by the denominator of the deductible quantities on both sides of the slash reducing. For example, if 15 subtract 4/5, 15 need to convert so: 15 = 15/1 = (15*5)/(1*5) = 75/5.
2
Subtract from the numerator derived by the first step improper fractions the numerator of the fraction is subtracted. The resulting value will be above the fraction bar of the resulting ratio, under the line and place the denominator to subtract fractions. For example, for the model given in the previous step, the entire operation can be written as: 15 - 4/5 = 75/5 - 4/5 = (75-4)/5 = 71/5.
3
If the numerator of the calculated values are greater than the denominator (improper fraction), to better represent it in the form of a mixed fraction. To do this, divide the larger number by the smaller the obtained value with no residue and would be a part of it. In the numerator of the fractional part of the deliver remainder, and the denominator unchanged. After this transformation the result of the above-described example, needs to take a look: 15 - 4/5 = 71/5 = 14 1/5.
4
The above algorithm produces the result in the format of fractions, but it is often necessary to obtain a decimal fraction. It is possible to produce described in the first two steps of the operation, and then divide the numerator of the obtained fraction to its denominator, the resulting value will be a decimal fraction. For example: 15 - 4/5 = 71/5 = 14.2 deaths.
5
Alternatively, the first step to translate subtracted from the fraction in decimal format, that is to divide the numerator by the denominator. After this will take away the subtrahend from the minuend in any convenient way (in a column on the calculator, mental arithmetic). Then the example above can be written as: 15 - 4/5 = 15 - 0,8 = 14,2.
Is the advice useful?
See also
Подписывайтесь на наш канал