How to wrap napkins for a festive table

Napkin is a constant attribute of the serving table. Beautifully and uniquely folded cloth napkins can give a serving of respectability and completeness. There are many ways to fold the cloth so that it itself was the decoration and attracted the attention of the guests. And although at first it seems that to make a figurine out of a napkin is an art, after a little practice you will get money quickly and beautifully. There are several options for how to wrap napkins for a festive table. 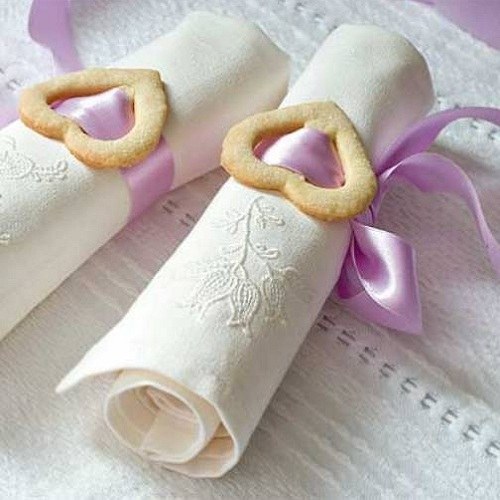 Related articles:
Instruction
1
Will krylataya folds the napkin into 4 equal parts. The bottom and the top fold to the center. The resulting layers fold in half. The left edge of the napkin fold to the center to half and the upper portion Unscrew the back to the left edge, like "accordion". Do the same with the right edge. To give the wings shape, fold the outer corners of the top of the addition to the left and right inside.
2
A napkin with a napkin visibledate folds into 4 equal parts. Fold it diagonally to make a triangle. The right and left corners of the triangle fold to the center. Turn the resulting form bottom to itself, without breaking the seams. Fold the sharp bottom corner to the center of the napkin. The left and right corners fold to the center. Flip the napkin and place on a plate.
3
Will treugolnichki a square napkin and fold it diagonally in the shape of a triangle. The left and right corners to the center fold down. Turn over triangles obtained from the square bottom side facing you and fold it in half. Fold the napkin again. Put the napkin on the plate in the form of a pyramid, folded edges forward.
4
Uselton cloth put on the table wrong side facing you. Make the triangle. The top corner of the napkin accordion fold to the center along a straight line of the triangle. Secure form, having a hand in the crease line. Put one end of the napkin cross through the center fold, making a loop. The long end of the thread through the loop and tighten. Spread the ends of the napkin and place it on a plate.
5
Chinese verslageta a square napkin in half. Start making pleats from the bottom up, by choosing the step 2-4 inches. Do the same on the other side. Fold the napkin like an accordion and secure it by sliding your hand along the bend lines. Place the accordion in the ring and unfold in the form of a fan.
6
Due to the variety of colors, patterns, textures and sizes of cloth wipe, can create a unique cosiness. Cloth towels can be used many times over several years, just they need to properly care. In addition, applying them, you can save a considerable amount of money. It is recommended to have 2-3 sets of fabric napkins for all occasions serving - holiday and everyday.
Is the advice useful?
Подписывайтесь на наш канал