How to turn off absorber

Car canister is included in the EVAP system of the fuel, which prevents the emission into the atmosphere of gasoline vapors from the system power supply. The charcoal canister is mounted on the fuel tank and connected by pipes to the separator of the fuel vapors and a purge valve. 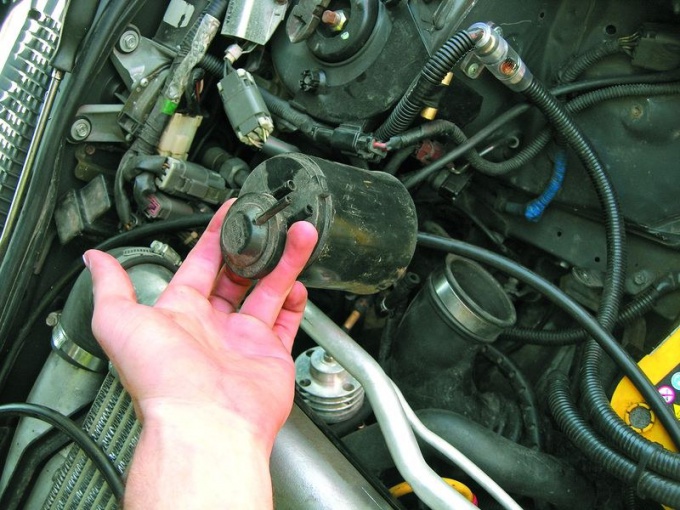 Related articles:
Instruction
1
In the tank are accumulated gasoline vapor that the canister picks up and injects into the throttle with the purge valve. There vapours are mixed with air and enrich the gasoline mixture.
2
Earlier in the tube tank had two valves and atmospheric steam. Latest released fuel vapors into the air. Today on fuel tanks should only atmospheric valve to allow air into the tank. Petrol vapour releases installed on the tank canister.
3
Some motorists do not understand the purpose of the adsorber and in a hurry to get rid of unnecessary, in their opinion, Assembly, arguing that it prevents them to service the engine. However, without the canister will not vent the fuel tanks in hot weather can lead to tragic consequences. In addition, the presence of absorbers on the car greatly affects the environment environment.
4
If there is a malfunction of the capture system may result in degraded driveability of the car, unstable idle speed, stalling, etc. are Especially affected because of this, vehicles equipped with computer diagnostics.
5
The fault recovery system to detect the appearance of a persistent smell of gasoline that appears due to the violation of the sealing of piping and components or failure of the purge valve. Also, the system malfunction may indicate unstable operation of the engine at idle or stop.
6
In these cases, you need to remove the canister from the motor, check it or replace. You will need a flat screwdriver and key 10. Disconnect the wires from the battery terminals.
7
Disconnect block with wires from the EVAP purge solenoid. Loosen the screws tightening the clamps, remove the hoses from the fittings purge valve.
8
Remove the bolt that tightens the clamp on the canister, remove the canister. After checking or replacing it, install the canister in place, acting in reverse order.
Is the advice useful?
See also
Подписывайтесь на наш канал