What games you can play spring on the street

"Spring, spring in the street, spring days, as birds filled spring days! Here passers-by do not pass, then the rope on the way chorus girls think ten times ten" - Agniya Barto described the situation in the spring Moscow, when with the first warm the kids went outside and played in all sorts of outdoor games. 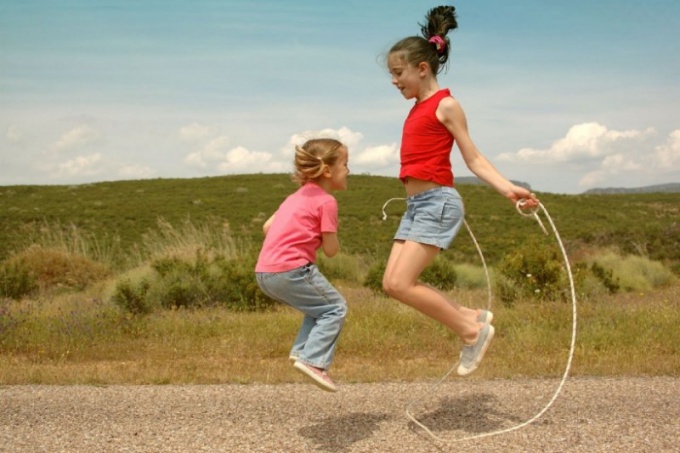 Related articles:
It is a shame, but with the introduction of computers, iPhones, smartphones in the life and being of Russians on the streets disappeared children. And with the first spring rays on the streets there are no strings on disappeared classics on the pavement, you do not hear the clink of balls. Children sit playing computer games, chatting on social networks that may not cause concern among the older generation. But children today simply do not know the mobile games that you can play on the street.

Classic street of fun – the "classics". For the game need chalk and a bit. As bits can take any flat tin box. Grandmother of today's children played a box from home filled for the gravity sand.

Rascherchivanija rectangle with an aspect ratio of approximately 5:3, divided into ten squares in pairs in five rows, each of which is signed with numbers from 1 to 10 – this will be the classes. In the upper part of the classics, draw a semi-circle in which is written "fire."

A simplified version of the game. Throws bat in turn in each class. After each throw you must gallop on one leg for all classes, starting with the one that was thrown a bit. When this bit must not fall on the line for the passage of con you can not step on the line otherwise the player loses a turn. If bits fall into the "fire" burn all the moves and the player starts from the first grade.

Sophisticated option for girls more nimble – you need to gallop all the classes on one foot, podpilivaya bat. The winner is the first one to ride all 10 classes.

Need to play jump rope and girls. The first girl jumps in any way to the moment as confusing. While the account is maintained. The next girl must first gallop as many times as you rode the first girl – "catch up", and then start its countdown, which will have to catch up with the next participant. To the winning and losing usually do not reach as fatigue subsides and excitement.

Need to play the ball and number of players at least three but the more the better. Children are divided into two teams, one beats the other. Bouncers stand at the edges of the site on two sides. The second team stands in the center. The bouncers task is to get the ball to any opponent, we must not let them catch the ball "candle", otherwise the player a bonus. When you hit the ball, the player is eliminated from the game. The game is played until the complete elimination of all team members competing. After that, the roles change.

Play four or more participants. The children are divided into "squirrels" and "dogs". The task of "dog" to catch any "squirrels", in this case either "squirrel" out of the game and waiting for the end, or the roles change, depending on the initial agreement. In the game there is a caveat – a squirrel can drop on any wooden object. It should say "knock, knock, I'm in the house" - "dog" can't catch a "squirrel". But after a certain period of time, a dog can say the magic words "one-two-three, wood burn" and you can re-catch "the squirrel".
Is the advice useful?
See also
Присоединяйтесь к нам
New advices