The problem of the origin of the people concerned humanity since ancient times. Various folk legends, tales, legends, religious teachings on its own explain this question. Research vision is based on the theory of evolution. 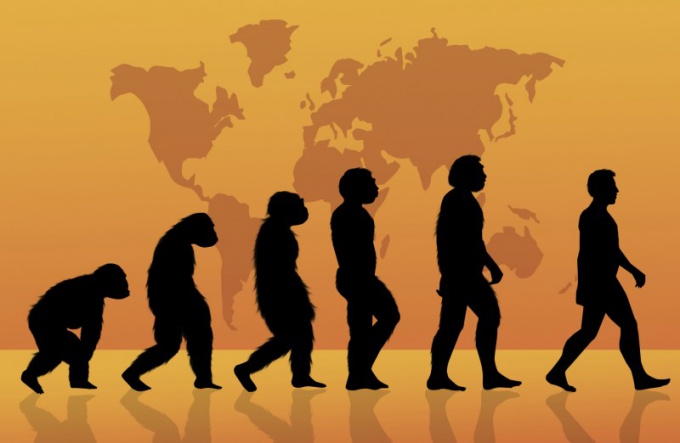 The origin and evolution of man studying anthropology. In the framework of this science sought answers to questions related to the formation of man, development of his work, speech and social order. This process is called anthropogenesis.

Modern scientific ideas about human origins are based on the idea that he came from the animal world. However, widespread in common parlance, the belief that man evolved from apes, is fundamentally wrong: the evolution of man and apes – parallel, deeply divergent branch of development.

When the first primates

According to the findings of anthropologists, the first primates appeared in Africa 70-60 million years ago. They are descended from the primitive insect-eating animals. At first they had to compete for food and "a place in the sun" with rodents, because of what they went to an arboreal way of life. This fact has led to the development of their characteristic features, such as: five-fingered limbs, acute stereoscopic vision, a large and complex brain. Millions of years human ancestors lived in trees in the hot and humid climate.

About 25 million years ago from common forms of primates diverged two branches, developing in the future, independently from each other. The first branch led to the emergence of great apes, the second ended with the appearance of a person.

Mammals lived 6-1 million years ago. Their remains were first found in South Africa. They already were much more similar to humans than modern apes. In connection with the transition to bipedalism, most significantly changed the skeleton and musculature of the hind limbs.

Prototropic get their food by hunting and gathering. In hunting animals, they began to use stones as projectile weapons. Separate groups of protanthropos later learned to make simple tools and make fire, thereby obtaining advantages over other animals. They have evolved to ancient people arhantrop.

From the oldest people there articulate speech, helped by the increase in volume of the brain and the complexity of its structure. They could produce a variety of stone tools, and more skilled to handle it.

The remains of ancient people – palaeoanthropes – were first found in Germany in the valley of Neandertal origin of their other name – the Neanderthals. They lived on the Earth during the ice age, took refuge in caves, maintained fire, learned to make clothes from animal skins for protection from the cold.

People anatomically modern type, appeared 60-50 thousand years ago, began to displace the ancient people. They were physically weaker than the last, but had a more developed brain. For the first time their remains were found in France in the grotto Kromanon, so they are also called CRO-magnons. They begin with branch of Homo sapiens.
Is the advice useful?
Подписывайтесь на наш канал