What is Sudoku and how to solve it

With the help of a crossword puzzle can be practical to pass the time, to make your mind actively work to develop logical thinking, memory, attention. But if you are tired of repetitive questions and you by heart, crammed the name of the highest mountain and the deepest trench, then go to the numeric brainteasers, Sudoku. 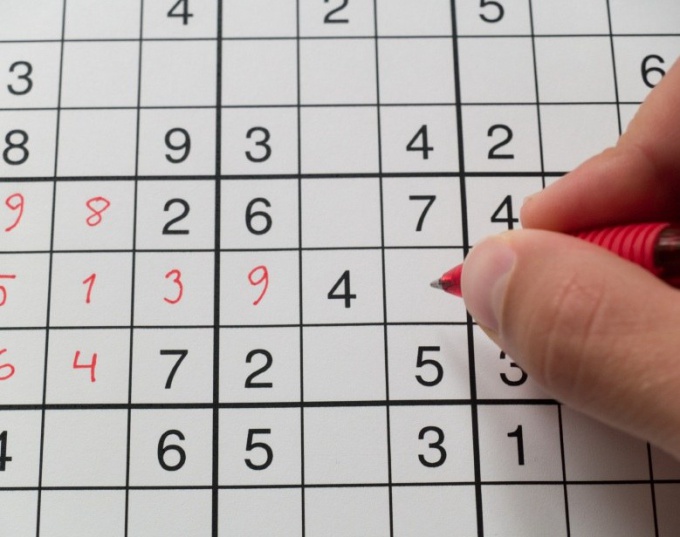 Related articles:
It's funny, but Sudoku has such a bright "Japanese" name, was born in the United States of America at the end of the last century and only a few years later reached the borders of Japan. In 2004, Sudoku appeared in the pages of print media, and soon, these unique crosswords became possible to find and freely available on the Internet.

So what is a Sudoku? A figure the size of 9 by 9 squares, each of which in turn are placed 3 by 3 cells. Some of them contain the digits from 1 to 9 inclusive. The player's task - to fill the remaining empty cells, but to make it so that the rows and columns of the original figure, and within each of the specified mini-squares of the numbers in any case are not repeated. It is here that the party games will need logic and reasoning.

Depending on how many source cells filled in the beginning, is offered to the player, Sudoku divided by difficulty levels. That is the most difficult Sudoku have a minimum number of non-empty cells. You must also remember that any crossword puzzle of this kind has only one solution.

Sometimes there are situations when party games literally have to guess the values in the cells and only then to validate the result, therefore, getting to the puzzle, it is recommended to stock up with eraser and pencil, or relax in front of the monitor screen. Today, a huge number of specialized resources that offer similar games of any desired level of complexity. When you turn on the game, the program will give you the combination of numbers in cells, which you will not be able to delete or change on their own, this so-called "key symbols" that you later come to rely on, filling the empty cell. The most severe version of the game may include markings 16 by 16 cells.

Getting to the game, you need to carefully look over the field of view and to identify the square, the row or the column that will be the minimum number of blank, empty cells. The success of the game will depend on whether you will be able to Orient in three directions at once: to take into account the rows and columns big square and little content.

Despite the apparent simplicity, these puzzles are usually so entertaining that she came to him, it is impossible to break away from the numbers and squares until, until you complete all the game field.
Is the advice useful?
See also
Подписывайтесь на наш канал