What animals live at the South pole

The geographic South pole - the point directly opposite to North - located near the center of Antarctica, the most southern, most remote and least explored continent. Despite the extremely harsh climatic conditions of the extreme South, here, as elsewhere, has its own inhabitants. Inner polar region of Antarctica is almost lifeless. Almost all of the fauna is concentrated in the coastal ice-free areas on the Arctic Peninsula and on the coast Islands and coastal ice floes. 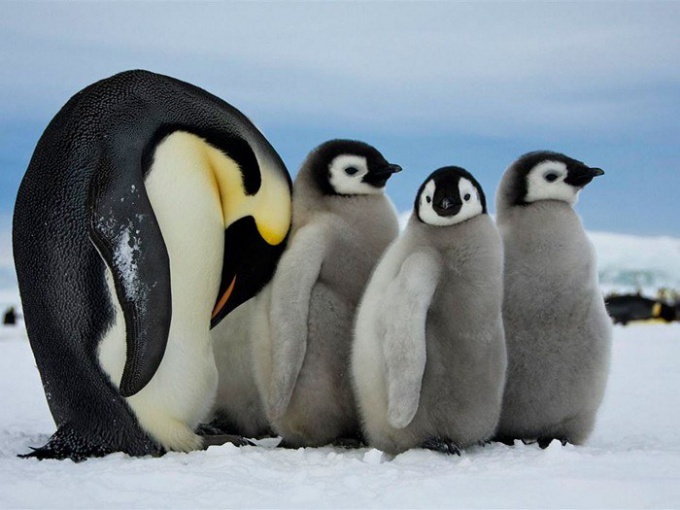 Instruction
1
The fauna of the extreme South is quite unique. Perhaps the most surprising inhabitants of Antarctica are penguins flightless birds similar to dressed in tuxedos people. Inhabits 7 of the 18 known types, from the large Imperial and Royal, whose growth reaches 160 and 100 cm, respectively – to the smallest, the size of which does not exceed 50 see All the penguins are great swimmers and divers. In the water they can reach speeds of about 25 km/h. They feed on fish, clams, squid, krill. 4 species of these birds nest on the mainland and on the Antarctic Peninsula. The most numerous is the Adelie penguin.
2
In the Arctic there are about 50 species of flying birds - albatrosses, Skuas, petrels, cormorants, Dominican gulls, Arctic terns, white Plover, etc. Some of them arrives to the shores of Antarctica in summer, but there are those who are here, nesting and hatching. They are all fishermen and live by the sea, although some, for example, the Skua, are also vultures and scavengers. Albatross - the largest of flying birds, not only in Antarctica but all over the world. Sweep of his powerful wings reaches 3.5 m. During the week the Albatross is able to overcome about 8000 km and Not much behind him giant Petrel wing span which reaches 2 m. the greater part of the Thunderbirds has such impressive size. The southernmost bird is believed to be the snow Petrel, which breeds inland at a distance of 300 km or more from the shoreline.
3
In the Antarctic, not the four-legged inhabitants. This is the territory of pinnipeds and cetaceans. The first is represented by several species of seals. The largest of them is the southern sea elephant, the length of the body which comes to 6.5 m and weight up to 3.5 t unfortunately, because of the ruthless destruction the number of these animals decreased greatly, now they can be found only on the coast of the Antarctic Islands. Some species - for example, the Weddell seal, Ross seal, southern fur seal – live there. Some migrate, preferring to wait out the winter in warmer waters. Most species feed on fish, crustaceans, molluscs. But there are exceptions. The leopard seal is a large seal, weight up to 500kg - predator in large numbers to exterminate the penguins. Known attacks sea leopard on people. One of them ended in the death of a person.
4
Cetaceans off the coast of Antarctica - orcas, sperm whales, blue and humpback whales. The blue whale is the largest animal on the planet. Its body length reaches 30m. Migrate. Winter cold holds at Australian latitudes.
5
Another inhabitant of Antarctic waters, ice fish – belokrovie the only vertebrate on earth. Here also dwells nototenia – a kind of cod, an interesting feature is the ability to hibernate. In General, off the coast of Antarctica is home to many different species of fish adapted for life in the icy water.
6
Typical representatives of the marine fauna of the extreme South are Antarctic octopus, Arctic starfish, crustaceans, jellyfish, some species of sponges, Arctic krill, MD solitary coral, colonial cryogenic, giant polychaete worm, etc.
7
On mainland Antarctica, there are surface of the lake. In the winter they freeze almost to the bottom, and in summer their shores appears a thin strip of melting ice. In lakes discovered microorganisms and invertebrates, like insect larvae – rotifers and tihohodka.
8
Mosses and lichens marginal strip of Antarctica sheltered insect is a mite, a wingless mosquito, fly Belgica. On the Islands there are bugs, spiders, and wingless moths.
Is the advice useful?
Присоединяйтесь к нам
New advices