How to draw the grim Reaper pencil

The grim Reaper - quite dark and sinister way, but because few people would want to see her in real life. However, nobody knows for sure exactly how it looks. Her image was known only through ancient legends and myths. Usually, death is depicted as a skeleton or wearing a black hoodie with a hood and wielding a scythe with a bony, old woman. 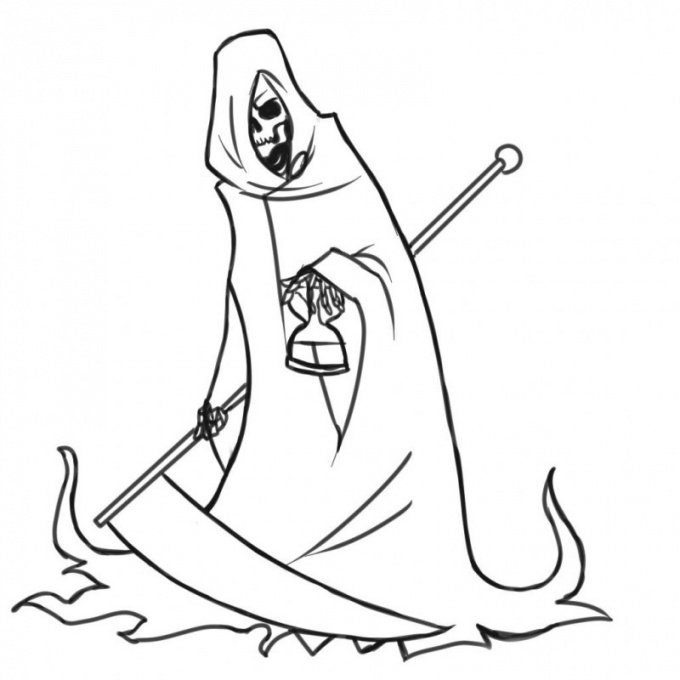 Why death is depicted with a scythe

Do you know why death is usually portrayed with a scythe? Such an attribute she got back in the 14th century during the plague epidemic in Germany, when thousands of people died.

It is believed that during the plague epidemic appeared a popular expression: "Death does not discriminate".

Over time began to mutate and Christian view of this image. So there was a view that death with the help of braids cuts off the eternal soul from the mortal body, thereby helping her to leave it and ascend to the sky.

In the art of grim Reaper for the first time portrayed the Renaissance artist Albrecht Durer in his engraving "the Knight, death and the devil." In Front and East Asia, it also started to draw with a scythe, regardless of the Europeans. It is not excluded that someone could still see the death and then describe its appearance.

In addition, in the Christian tradition there is an allegorical comparison of the entire human race with a wheat field. Sooner or later, according to ancient legend, death in the role of a ruthless Reaper will come and cognet his scythe fruit. With good ears should fall into the garner of the Heavenly Father, and the bad should be burned by Hellfire.

Now slightly positive. Oddly enough, death has a positive side. It is directly involved in the process of rebirth and renewal of life and of all nature. Without her would be impossible and life, because all things begins and ends.

How to draw the grim Reaper: step by step instructions

First, draw an oval shape for the head and add the oblong lines for future apparel. Since it's a hoodie or a raincoat, you can not be afraid to draw them. Even if you get extra lines, they will play the role of the folds on the clothes.

Then circle the shape more clearly and draw one of the arms. Next, add details to the hoodie. Draw a hole for the head of death. For sleeve arm hole should be bigger. Draw sleeve folds around the arm. At the bottom of the hoodie draw the hem in the form of wrinkles, resembling fire.

In the visible part of the hood draw a scary face the Reaper of lives, rather, it is to be a human skull with empty eye sockets and hollows under the cheekbones. Then draw your fingers in a hooked bone joints, 3 knuckles on your finger. Skin death should not be absolutely.

If you want, at the end, darken some areas of the pattern (the orbit of the skull, the folds of robes, the nose, etc.).

To give a gloomy image of the most colorful place in the hand of the skeleton, the hourglass, which represent someone's life. Then draw part of the main attribute of death, a long pole for the spit.

It only remains to add the blade to the tool and can say that you have almost all done. Correct line, if you want, circle them brighter. That's it, your drawing of the ominous grim Reaper, ready.
Is the advice useful?
Подписывайтесь на наш канал