How to draw a peace symbol

A symbol of peace, love and purity is considered to be a white dove. No wonder the image of this gentle birds are often found in wedding paraphernalia. The ability to draw a dove with a pencil is useful skill that can you not once be useful in life. Decorating his own birthday card in this picture, it can give charm and poignancy. 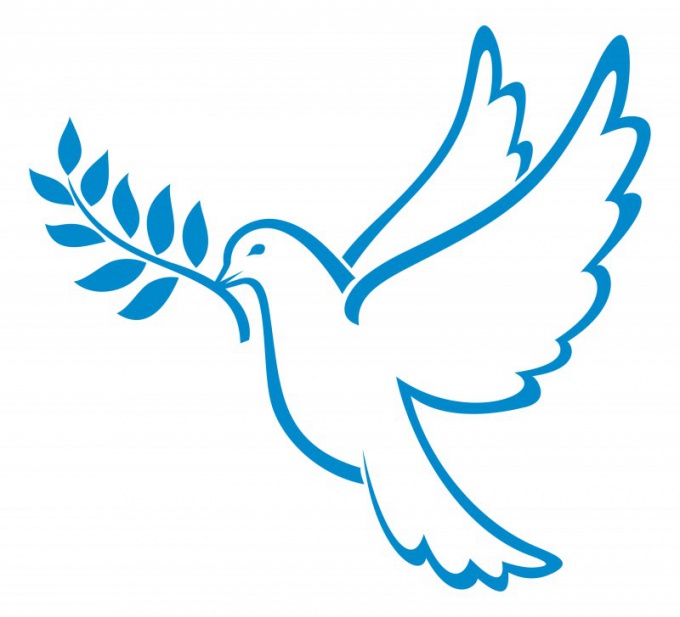 Why is the dove a symbol of peace?

In the oldest book of mankind - the Bible - says that it was a white dove brought to Noah of the old Testament the olive branch which indicated the end of the flood.

The ancient Romans believed of doves are building a nest in the helmet of the warrior Mars, the symbol of peace. This bird was associated in those days with good news - the end of the war.

White dove was considered a symbol of peace throughout the world after the famous artist Pablo Picasso depicted the emblem for the world peace Congress, held in 1949 On the label adorned the bird, bearing in its beak an olive branch.

If you look closely, the best candidate for such a symbol is hard to find. For example, a Sparrow is too fussy, Raven - dark, and the peacock - too pompous. Probably would be a Swan, but it is a symbol of fidelity in love.

In modern life, sometimes release white doves as a sign of peaceful intentions. For example, did the current Pope Francis I. During the sermon on Sunday on the situation in Ukraine, the Pontiff released from the balcony of St. Peter's two doves as symbol of peace. Curiously, the birds immediately attacked by a Seagull and a large crow that attacked them. However, the pigeons were able to fly.

How to draw a pigeon with a pencil

To draw the pigeon should start with the basic outline - the head, wings and torso. First, mark the contour of the head of a dove, and from it draw a line slightly tilted line of the body. The tail of a flying bird should fall down. Wings, draw a "tick", however, don't forget to follow the proportions and size of the contours. This stage of drawing is the easiest, but at the same time, it is most important. After all, how will you draw the first contours, depends on the further picture of the bird.

Now a little "relive" the figure of a dove, adding a few lines. Draw the outlines of the body and contour line of the tail. Also, add the bird's feet, drawing only the beginning of the short contour line.

Pigeon should look like flying. To do this, draw the outline of the feathers of his tail and wings. Then draw eyes and beak of a dove.

To figure need to add a few details. Most of the time you will need to spend on it to get to work on the birds feet. Then a few strokes of the pencil, divide the wings of a dove into several segments.

Well, you have reached the final stage of drawing birds. Very easy to draw the feathers for the tail and wings of a dove, because their contours already drawn. You will only need to separate the lower contours of sharp areas and extend the line all the way to the base of the wing. A little different are drawn the tail feathers. They should be represented in the form of elongated ovals.

That's it, now you got to draw a dove - a symbol of peace. If desired draw also the olive branch in the beak of a bird. Since the dove should be white in color, its paint is not required. You can only make brighter the contours of the image and make the sky pale blue.
Is the advice useful?
Присоединяйтесь к нам
New advices