Service "Madonna" was very popular from the Housewives who lived in the USSR. A lot of women dreamed of buying this cookware, but buy it was not so easy. 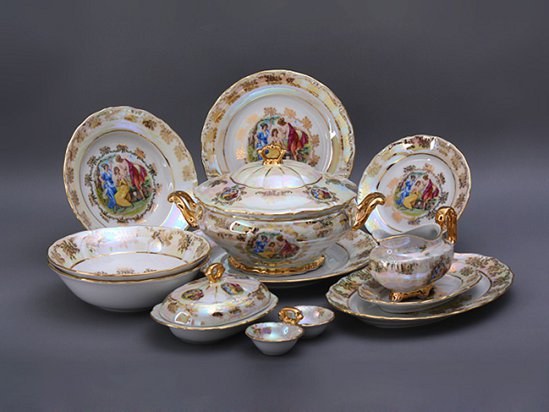 The popularity of the service "Madonna"

Dining set "Madonna" is a set of porcelain tableware of high quality. For the first time in Russia, but rather in the former USSR know about its existence in the postwar period. Dishes were made in Germany. The first sets "Madonna" appeared in the homes of Russian officers at a time when Soviet troops entered the territory of Germany. The military immediately appreciated the quality of porcelain tableware that was produced in the local factories.

In the post-war period in the GDR began to restore the production of porcelain dinnerware. It is from this country they are imported to the territory of the USSR. In those days German dishes was a large deficit. Could afford to buy, not all families.

Amid all imported from the German democratic Republic porcelain stood out is the service "Madonna". Its extraordinary beauty has become a symbol of luxury and belonging to a particular social class. Fashion service "Madonna" introduced the wives of Soviet generals. Later all the Housewives of that time wanted to buy this cookware. For many years to buy "Madonna" was only possible abroad.

Famous tableware set is notable for its rich painting, an abundance of gilding, and a picture of half-naked beauties. At the time this cookware has been a symbol of rich and luxury life. Lucky winner of the "Madonna" exhibited set on the table only on holidays.

Real decoration of the set is the tureen. In Soviet times it was decided to put it on the table on special occasions.

Currently, the service "Madonna" is not so popular. Perhaps this is due to the beginning of its mass production. After analyzing which of the dishes is in high demand, the leadership of the German factories have made the decision to increase the production volumes of the set.

For many years the Madonna has released not only in Germany but also in Poland, Czech Republic and other countries. Unfortunately, these sets do not differ-the same quality that was inherent in it earlier. That is why collectors and just lovers of good dishes I try to buy the sets that were released in the GDR in the 50-ies of the last century.

In many Russian houses and now decided to put the service "Madonna" on the table only on special occasions. This cookware is a symbol of the post-war years.

Sets the value of the Polish and Czech production is much lower than the cost of the tableware that was produced in the GDR.
Is the advice useful?
Присоединяйтесь к нам
New advices