St. John's wort is a perennial plant with numerous Golden-yellow flowers. St. John's wort is widely used in folk medicine, so many people collect this plant and dried for the winter to use in case of need. However, before you go for this flower, I should know what he looks like. 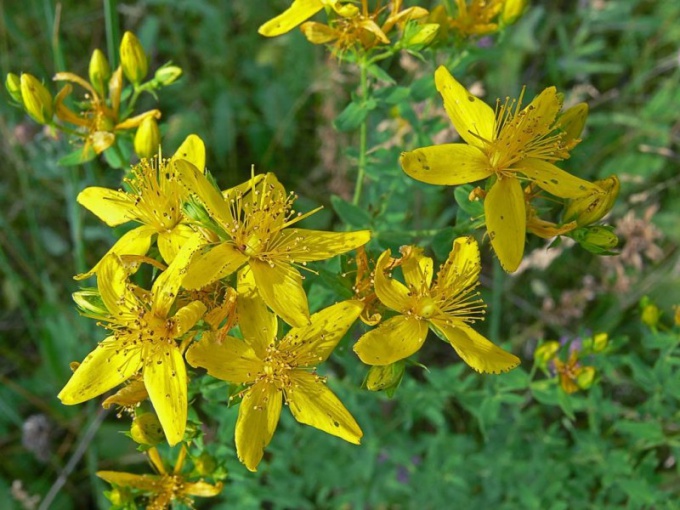 Related articles:
Instruction
1
St. John's wort is a herbaceous plant stems which are usually dihedral or tetrahedral. Rhizome St. John's wort is thin and highly branched, and numerous leaves ovate, or slightly elongated. Even from a distance, St. John's wort can be spotted by its fairly large flowers. They are bright yellow, with five petals. In most species of St. John's wort flowers gathered in clusters, rarely solitary.
2
On the territory of Russia spread several types of St. John's wort. If you are planning to stock them as medicines, you need St. John's wort, which is not the most common. To distinguish it from a fellow St. John's wort square, elegant or gustavoleao, pay attention to the leaves of the plant. They should be egg-shaped, with numerous bright inclusions – essential oil glands, similar to the small holes.
3
Differ between Hypericum perforatum and flowers. They are large, with smooth narrow sepals. If the inflorescence of St. John's wort to RUB between your fingers, the pollen will stain the skin reddish-purple color.
4
Look for St. John's wort should be bright forest and in forest clearings, river valleys, steppes and forest edges is the favorite place of growth of the plant. Especially St. John's wort is like a fresh felling.
Note
If you are planning to prepare St. John's wort, this should be done during flowering. Depending on the region it may take up to July-September, after which the inflorescences formed fruit-boxes. You need to cut the top of the plant, and then tied the flowers in bunches, dry them in a well ventilated and protected from direct sunlight.
Useful advice
St. John's wort used as anti-inflammatory and anti-microbial agents. Also tincture of St. John's wort has healing and choleretic action.
Is the advice useful?
See also
Подписывайтесь на наш канал