How to draw an equilateral triangle

Among all possible applications of plane geometry, and related geometric constructions, we can distinguish the most typical. Their decisions represent a clear sequence of actions and are used as components of solutions to more complex problems. To this type is the problem of how to draw an equilateral triangle. 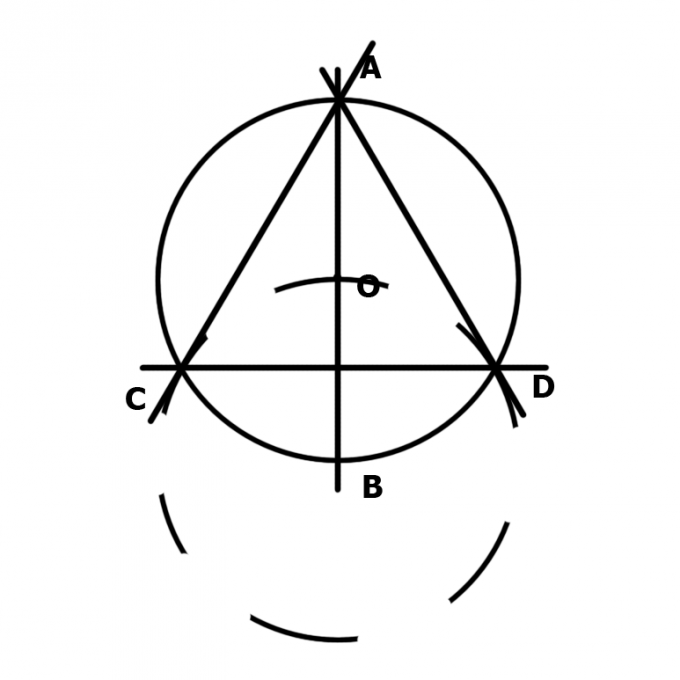 Related articles:
You will need
Instruction
1
Put the point. Let this be point O. the Position of this point should be approximately in the center of the area allotted for the construction of an equilateral triangle.
2
Draw a circle with center at point O. Set the optimum distance between the legs of a compass is such that when drawing a circle was completely placed in the area of the sheet is reserved for builds. Install the needle of the compass at point O. Watertite circumference. Put the compass without changing the distances between his legs.
3
Draw a line segment passing through the center of the circle and intersecting it at two points. Place the ruler so that the plotted segment has passed through the point O. make Sure that both ends of the line lie outside the circle bounded by the circumference. Draw cut. Let A and B be the intersection point of the line segment with the circle.
4
Construct the points corresponding to vertices of two angles of an equilateral triangle. Take the compass. Since the construction of a circle with center at point O in the second step, the distance between the legs should remain constant and equal to the radius of that circle. Install the needle of the compass at point B. Draw a circle. This circle will intersect the circle with center at the point O at two points. Let it be points C and D.
5
Draw an equilateral triangle. Using the line pairs connect points A, C, and D. the Segments AC, AD and CD be the sides of the constructed triangle. The equality of the parties can be sure with the help of a compass. Valid absence or presence of differences in the lengths of the sides depends on the accuracy of the produced constructions.
Note
Avoid changing the distance between the legs of a compass in the implementation of the actions described in the second, third and fourth step. If it still happens, start the build again.
Useful advice
For a more accurate build use a metal ruler, pencil and compass with a well-sharpened lead. It is also desirable that the caliper had retaining nut.
Is the advice useful?
Присоединяйтесь к нам
New advices