How to put a network on the river

Network is one of the oldest inventions of mankind. In ancient Russia the network trailed mostly by women, and used native men. Now very few who holds the secrets of knitting nets, and put them on the rivers unit. We will tell you how to do it. 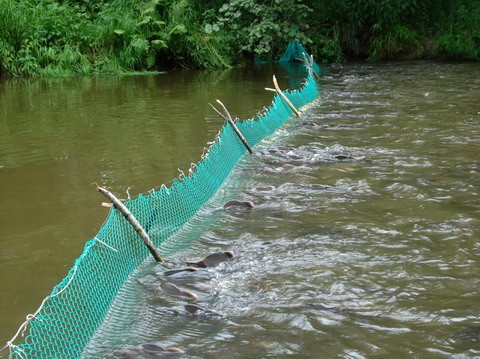 Related articles:
Instruction
1
On small rivers of the network can be put without the boat just stepping ashore. In this case, the network is spread along the coast or perpendicular to it. This method is particularly effective in spring and in shallow water. In addition, for your own protection, wear a special rubber suit. Be careful, be careful not to get lost in your own network.
2
On a narrow river network can deliver, even without going into the water, through perlage. It will require the participation of two fishermen. They are on opposite banks of the river. The first fisherman casts to the other side, a thin cord with a load. The second binds a cord to the end of the filler cord and begins to etch the network. The first fisherman at this time pulls the cord on his side. This method of rasstavte networking is best used in combination with the surge of fish that is particularly appropriate for rivers with steep banks and deep pools.
3
On a small river network can be put in the League. On the shore fasten one end of a cargo cable. The network is laid out neatly, and to the second end of the cord tie a load. This end is cast into the pond, he drags the entire network. Keep in mind, this method is not completely reliable, the network can get confused and have to start over, scattering all the fish.
4
Most often networks are boats or other watercraft. It is convenient to arrange the network together, for example, one man rowing with oars, and the second network slowly bleeds into the water.
5
Network set even in winter, under the ice, but it is quite time consuming. On the ice on one line cut two holes at a distance of approximately 2-3 m from each other. Then with boat hook and a pole with a rope between the holes in the ice pull the rope. Tie the rope to the chain and also pull it under the ice. This method is especially suitable for first ice.
Note
Don't forget that in some regions of our country fishing nets requires permission or license.
Is the advice useful?
See also
Присоединяйтесь к нам
New advices