How to find the area of a pyramid 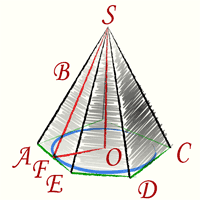 Related articles:
You will need
Instruction
1
The lateral surface area of any pyramid is equal to the sum of the areas of the lateral faces.

Because all the lateral faces of a pyramid are triangles, it is necessary to find the sum of the areas of all these triangles. The area of a triangle is calculated by multiplying the length of the base of the triangle to the length of its height.

Before us is a pyramid. At the base is a regular n-gon with side a. The height of the side faces h (by the way, is the name apofema pyramid). The area of each lateral face is 1/2ah. The entire side surface of the pyramid has an area of n/2ha, calculated by summing the squares of the side faces. na is the perimeter of the base of the pyramid. The area of this pyramid we find: a work of apogamy of the pyramid and one half of the perimeter of its base equal to the area of lateral surface of regular pyramid.
5
With regard to the area of the entire surface, then just add to the side area of the base, according to the principle discussed above.
Is the advice useful?
See also
Подписывайтесь на наш канал