How to find the concentration of acid

The concentration of the acid – value that indicates what proportion of this substance is a certain quantity or volume of its solution. It can be expressed in different ways: in the form of a mass fraction, molarity, molality, etc. In laboratory practice, it is often necessary to determine the concentration of acid. 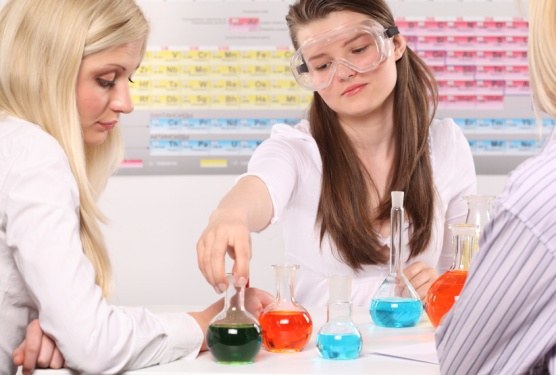 Related articles:
You will need
Instruction
1
Suppose you have a container label H2SO4. That is, once it becomes clear that it contains sulfuric acid. But no more information there. How do you determine its concentration? You can do this by using the table of densities of solutions. There are many directories where the values of the density of the solution of chemicals depending on their concentration.
2
Take a graduated measuring Cup, weigh it on a laboratory scale. Denote the mass of the empty Cup as m1. Using a glass pipette add it some volume V of sulfuric acid. Again weigh the Cup, indicate its mass as m2. The density of the acid is given by: (m2 – m1)/V.
3
According to the table of densities, set the concentration of the solution. Assume that during the described experience, you calculated the density of sulfuric acid: 1,303 grams/milliliter. It corresponds to 40% concentration.
4
As determined by the concentration of the acid? There are sensitive and very accurate method called direct titration. It is based on the neutralization of the acid by the alkali solution whose concentration is known. For example, in the case of sulfuric acid: H2SO4 + 2NaOH = Na2SO4 + 2H2O.
5
The reaction scheme shows that to neutralize one mole of acid will need two moles of sodium hydroxide. On this basis, knowing the volume of the investigated solution of acidvolume of alkali used for its neutralization and the concentration of the alkali, we can calculate the concentration of acid.
6
But how to determine the exact amount of alkali needed to neutralize the acid? With the indicator changing color. For example, litmus. The experience is so. Over a vessel with known volume of acid (which also add a few drops of indicator), attach a graduated burette with the alkali solution.
7
Record the reading of the upper level of alkali, then carefully loosening the tap of the burette, drop by drop start to add it to the acid. Your task is to turn off the tap in the moment when the red indicator will disappear. Record the reported lower level of alkali and calculate what its volume left for the neutralization of the acid.
8
And then, knowing the magnitude of the volume and the precise concentration of lye is easy to calculate how many moles of alkali are reacted. Accordingly, the number of moles of acid was 2 times less. Knowing the initial volume of the acid, you will find its molar concentration.
Is the advice useful?
See also
Подписывайтесь на наш канал